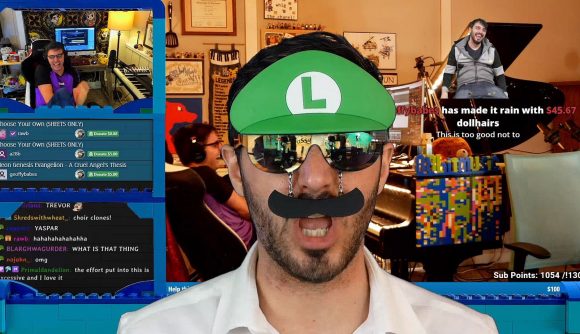 A music streamer has created arguably the best (and potentially longest) donation alert on Twitch.

Trevor ‘88bitmusic’ Gomes is an uber talented musician who streams himself creating music and doing covers of tracks, theme songs and scores from video games for his viewers. He put that talent to good use to create what we think is the greatest donation alert of all time: a four-minute, completely ridiculous cover of Africa by Toto, complete with hilarious visual effects and even a gorilla playing the bongos. We’re not joking.

88bitmusic was teasing in his stream that he had a new donation alert ready to go for the amount of $45.67. While the amount might seem a bit random, he has an ongoing theme of creating alerts for donations with consecutive numbers. It took just a matter of seconds for the new alert to go live before a viewer tipped the magical $45.67 to trigger the incredible moment. “Well, I’m going to kick back and do nothing now,” 88bitmusic said, hinting at the length of the alert before it began. He reclines in his chair, sips on a beverage and watches as his crazy creation begins.

This version of Africa is also a full length cover, with the alert in its entirety lasting around four minutes. The amount of effort he must have put into creating it, as well as the sheer funniness of it, sent his chat wild.

Here it is. Arguably the best(?), most absurd, most needlessly elaborate donation alert in Twitch history, which we debuted yesterday.

You’ve never seen anything like this and you probably liked it that way. I’m sorry.https://t.co/80sSXMPjgd

“Is it braggy if I say that’s the best donation alert on Twitch?” he joked once it had finished. “I am never making something that elaborate for a donation alert again!”

There were a further nine donations of $45.67 throughout his stream, resulting in around 40 minutes of 88bitmusic’s version of Toto by the end of his 8 hour stream. You can never have enough Toto, right?