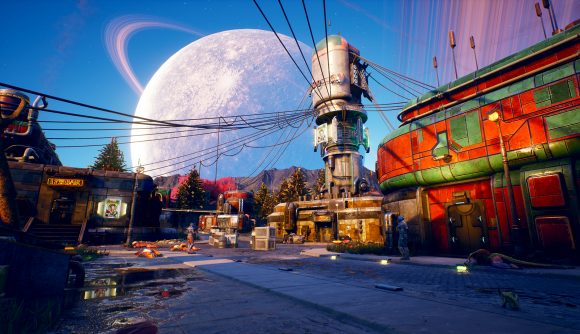 If there’s anything we’ve learned from the world of Twitch chat, it’s that you shouldn’t leave thousands of viewers make important decisions in role-playing games. Especially when there’s a gun involved.

But that’s exactly what Obsidian did to celebrate the upcoming release of The Outer Worlds, a new role-playing game that’s similar to titles from the Fallout series. The Twitch Plays stream was put on on October 22 to showcase the decision-based story its new game has to offer, and we know now that you can play quite aggressively.

The stream, which had a peak of 2,391 viewers, allowed chat to control the main character by spamming a number of commands. But by the time chat finally met Guard Pelham, the first non-playable character in The Outer Worlds, their thirst for blood became apparent very quickly.

In fact, Twitch chat didn’t even want to entertain the Guard’s chat. They patched him up, took his gun off him, and then skipped through almost every other chat option, before choosing to leave the conversation. Shortly after that, Twitch chat began spamming the commands RT, aim, and look down, to stop the poor chap dead in his tracks.

And it’s fair to say that the majority of viewers were pretty proud about what they’d just done, celebrating in chat before instructing their character to go over to the guard’s body to not only loot him, but to teabag him as well.

The rest of the stream, although entertaining, was pretty janky at times, with dozens of movement commands coming in every second.

But if you feel guilty about killing Guard Pelham and want to forge your own way in The Outer Worlds, you can always redeem yourself when the game comes out on October 25.