A California resident is suing streaming platform Twitch for $25 million because his exposure to “overly suggestive” female streamers is making his sex addiction worse.

In court documents obtained by Dexerto, the plaintiff, Erik Estavillo, demands not only the sum of $25 million in damages but also that the 21 female streamers he outlines in the lawsuit receive permanent Twitch bans for violating the platform’s terms of service. The document also describes how Estavillo suffers from a number of medical conditions including OCD, which has, in turn, caused his sex addiction.

The complaint, which states that Estavillo’s account follows “786 female streamers” and “zero” male streamers, claims that “Twitch has extremely exacerbated his condition by displaying many sexually suggestive women streamers through Twitch’s twisted programming net code, making it nearly impossible for the plaintiff to use Twitch without being exposed to such sexual content.” It also says that Twitch has no way of “filtering genders” of streamers on the platform, meaning Estavillo is constantly exposed to “thumbnails of scantily clad women.”

The court document goes on to give an extensive list of some of the biggest female streamers who Estavillo believes to have infringed TOS and heightened his sex addiction, including Natalia ‘Alinity’ Mogollan, Kathleen ‘Loserfruit’ Belsten, and Imane ‘Pokimane’ Anys.

In the plaintiff’s “Request for Relief” he asks that the $25 million in damages, if he’s successful, are split between himself and other Twitch Prime Turbo users. The remaining funds could then be donated to COVID-19 and Black Lives Matter charities. He also demands that all the streamers listed in his document are “permanently banned” along with any streamers that violate the TOS in the future. 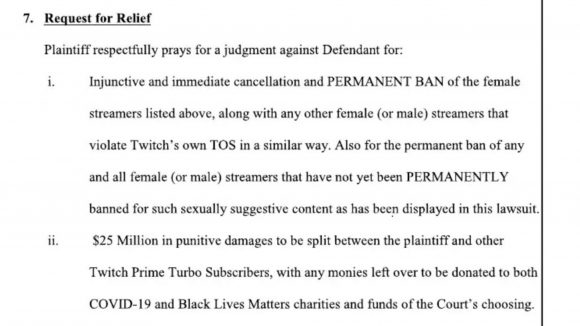 The document also covers some of the “graphic” consequences of Estavillo’s obsession with female streamers that he is claiming damages for, including “damaging his retina” after spending hours “staring at the breasts of streamers.”

You can read the full court document here, but be warned – it’s definitely not safe for work.

Twitch was officially served with a summons on June 19, so the platform will have to respond in one way or another soon.