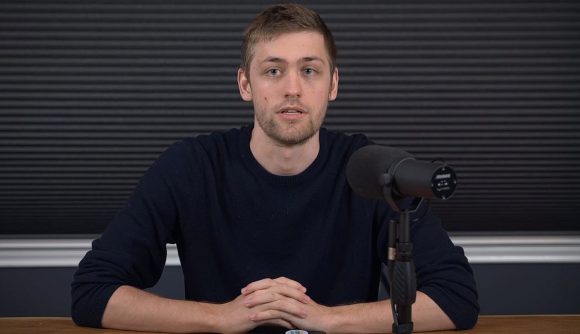 One of Twitch’s biggest streamers, Chance ‘Sodapoppin’ Morris, has poked fun at the platform’s recent Pokémon card hype by doing his own rather unorthodox vintage booster box opening.

After getting his hands on a pretty rare, extremely desirable, and very expensive box of First Edition Team Rocket Pokémon cards, which were first printed in English over two decades ago, it first seemed that Pokémania had struck Sodapoppin. However, it quickly became clear that the contents of the booster box, which would have been bought for tens of thousands of dollars, would not be ending up delicately sleeved in a binder to keep them in mint condition.

Fellow streamers such as Nick ‘Nmplol’ Polom, Matthew ‘Mizkif’ Rinnaudo, and ‘IslandGrown’ – who we spoke to earlier this month about the Pokémon TCG craze on Twitch – could only look on in horror as Sodapoppin cracks open the packs and begins a reign of torture and terror upon the desirable vintage cards.

Immediately, Sodapoppin empties out several packs onto the table and begins to shuffle them as you would a deck of playing cards. He then goes on to look through the cards after dipping his hand in a bag of Cheetos.

Trust us, if you’re wincing already, you may wanna click away… It only gets worse.

Throughout the stream, Sodapoppin spins his wheel of torture whenever he pulls a rare, expensive card to decide in which unfeasibly cruel way he will destroy it.

After dealing with all the high-ticket items, the streamer then mass-destroys the rest – by throwing them into a blender.

While we didn’t get much of a chance to see the quality of the cards before they were maniacally destroyed, it’s likely that Sodapoppin wrecked upwards of $30,000 worth of rare Pokémon cards during his stream.

While it’s certainly fair to disagree with Twitch streamers’ recent obsession with Pokémon cards and big-money openings, many are not happy with Sodapoppin’s method of expressing that.

These rare booster boxes are part of an ever dwindling supply, having not been printed for over 20 years, so Sodapoppin’s rampage has been perceived as disrespectful and wasteful. However, it’s safe to say that the 100,000 people watching didn’t have much of an issue with it.