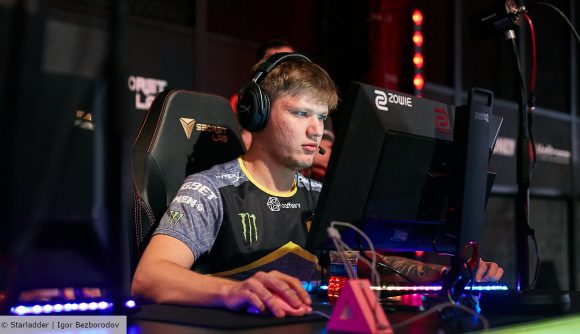 Counter-Strike: Global Offensive player Oleksandr ‘s1mple’ Kostyliev has called on Twitch to ban scammers that are impersonating him. The plea comes one week after the Natus Vincere AWPer was banned from the platform for using a homophobic slur while streaming.

Skin scammers are trying to capitalise on s1mple’s ban by streaming his old broadcasts under the CS:GO category on Twitch. The streams are emblazoned with banners asking viewers to enter upcoming giveaways, which if clicked on, will take you to a lookalike Steam website. From there scammers will be able to harvest your login details and your skins.

But despite asking Twitch to remove him from the platform altogether following his ban last week, s1mple wants Twitch to take action and stop his fan base from being exploited.

The AWPer isn’t the first to be hit by these types of scam streams though. Similar streams were set up following ‘Michael ‘Shroud’ Grzesiek’s move to Mixer, which eventually died off.

I see my live fake profiles on twitch scamming people everyday, wtf? Isn’t it your responsibility to protect your own people?

And although Twitch is pulling down the streams as quickly as possible, the platforms seems to be acting directly from reports. So if you see one of these dodgy streams appear on Twitch, you know what to do.