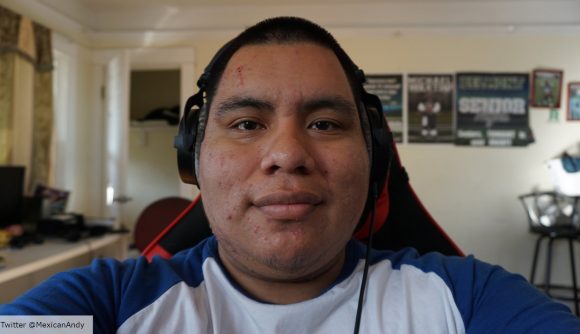 Twitch’s brand refresh hasn’t got off to the best start after eagle-eyed fans spotted that the streaming platform had used a clip of a permanently banned streamer in a promotional video on the new Watch page.

A clip of Mexican Andy, who was banned following four Terms of Service violations in 2017,  was used to promote the streaming section for Fortnite. The clip depicted the IRL streamer celebrating his Victory Royale by doing the ‘Best Mates dance, and it’s safe to say, the irony wasn’t lost on Mexican Andy.

“I just woke up from being drunk and all I gotta say is Wtf LMAOO,” he tweeted, after esports consultant Rod ‘Slasher’ Breslau brought it to his attention. Although Twitch acted quickly to replace the video with one from NickEh30, fans have been left baffled as to how something like this was able to slip through the net.

I just woke up from being drunk and all I gotta say is Wtf LMAOO https://t.co/yitIJEs9lV

Twitch hasn’t commented on the mistake, and has instead left fans to get used to the website’s new colour palette, UI and streaming settings.

And, while it’s probably the closest Mexican Andy will ever get to streaming on Twitch again, it’s unlikely the YouTuber, who boasts over 43,000 subscribers, will lose any sleep over it.