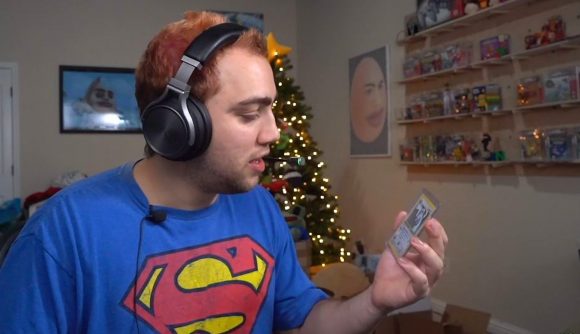 In the latest high stakes opening of a vintage Pokémon TCG booster box on Twitch, one of the platform’s biggest streamers has pulled one of the most expensive and rarest Pokémon cards on the planet in front of 100,000 viewers.

Matthew ‘Mizkif’ Rinaudo, who has been well and truly sucked into the Pokémon TCG-mania on Twitch in recent weeks, had got his hands on a sealed booster box of First Edition Neo Genesis packs. Mizkif purchased the box, which remained untouched for 20 years until yesterday’s stream, for an eye-watering $35,000 with one goal in mind: finding the very rare and extremely expensive holographic Lugia card.

Prior to diving into the packs on his Lugia hunt, Mizkif reveals to his viewers that just a day after he bought the Neo Genesis box, he was offered double the price he paid for it, so around $70,000, by another buyer to take it off his hands. However, he turned down the opportunity to double his money for the shot at a Lugia, which if found in perfect PSA 10-graded condition, can sell for well over $100,000.

After opening 34 of the 36 packs in the box, things weren’t looking all that great for Mizkif. He had found 11 of the 12 guaranteed holographic cards, so had just one shot left at the Lugia.

However, alongside fellow streamer ‘IslandGrown’ – who in recent weeks has become Pokemon card expert and supplier to several of Twitch’s top streamers – pack 35 provided Mizkif the goods.

Headphone users, you may want to turn down your volume for the following clip…

After many minutes of close inspection, the two streamers struggled to find any scratches, blemishes, or poor centring on the card that would prevent it from being graded PSA 10, which could result in a massive payday for Mizkif.

The last PSA 10, First Edition holographic Lugia sold online for a staggering $119,000, which gives you an indication as to just how much this iconic card is worth.

Muzkif’s stream peaked at around 105,000 viewers, according to TwitchTracker, which is the largest audience his channel has ever seen on Twitch.