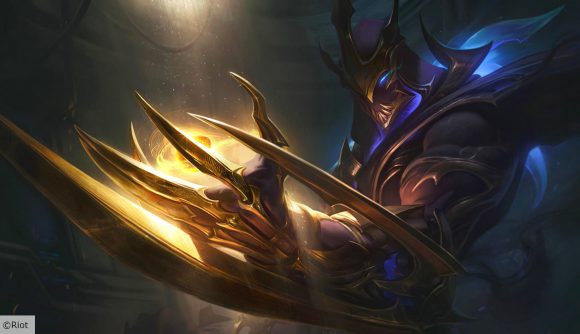 Tarzaned, who had been drafted by Tyler ‘Tyler1’ Steinkamp to his bizarrely named team ‘Shadow Dogs Unleashed’, became emotional as he explained to his chat that he had found out an hour before the tournament that he would be facing the ban and attributed the news to his sub-par performance throughout the competition. He thanked his chat for their positivity and seemed distraught that he would be unable to stream for them for the next month.

“Usually when I look at my chat I see a lot of hatred,” he says through the tears. “But looking at my chat [today] I’m so happy at the community we’ve built. Thank you guys…. And I’ll see you guys soon, OK? Love you all.”

In a statement on Twitter, Tarzaned further elaborates on the situation, and says that the ban was in response to comments he’d made to another player who had been “griefing me for years on-stream, so I stooped to his level and let him win.”

Tarzaned, who has over 240,000 followers on Twitch, claims this is the first time in four years of streaming that he has received any kind of suspension on the platform.

He also thanks his Twitch Rivals teammates, including team captain Tyler1, for including him in Shadow Dogs Unleashed.

“When I got the DM from Tyler telling me that he was drafting me over all the other players, I thought to myself either he thinks that I’m actually good or just wants to fuck with me,” Tarzaned writes. “The more time we spent together practicing, synergizing and bonding as a team made me realize that this is the real deal. I actually felt valuable for the first time in my life in the League of Legends world.”

Tyler1 has responded to Tarzaned’s ban and told his stream that he’ll be back “stronger than ever.”

Tarzaned’s ban begins today, November 27, but the streamer has said that he will try to appeal his suspension.