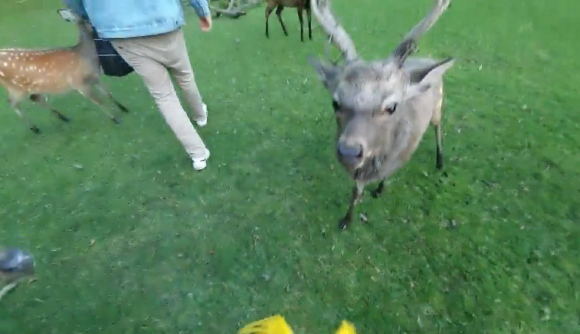 Twitch streamer ‘Jinny’ learned the hard way that deer are not always as docile as they seem, after a buck attacked her and stole her backpack. She had been stroking a set of female deer when the male buck strode up, keen not to have anyone wander in on his territory.

Jinny reached into her bag as the buck approached, but before she could do anything else, the buck butted her with its antlers and ended up with her backpack wrapped around them. As she stumbled backwards, the deer all scattered and fled, apart from one brave soul who just stood by and watched the buck struggle with the backpack.

It appears that the loops of the backpack got caught around the various twists of the buck’s antlers, and after being unable to shake it free, he instead bolted off to safety, taking the backpack with him, leaving Jinny to shout “that’s my bag!” after him.

As she shouted, the buck jumped over a felled tree and was able to finally jostle it loose; or maybe he just heard Jinny’s cries and didn’t want to steal the bag after all.

It’s not the first time nature has gotten its own back on a streamer, with Australian Valorant streamer ‘Lynchy_au’ being headshotted by an actual magpie earlier this year year after the bird flew into his house.

Nature is healing, and it’s coming for Twitch streamers.