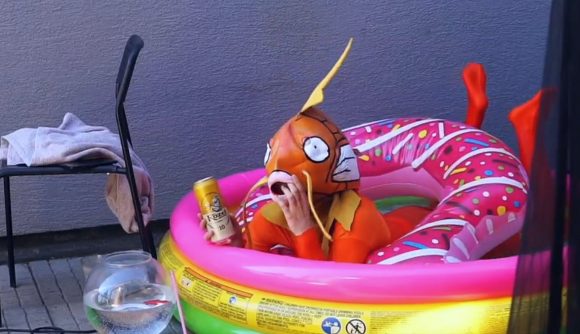 Trends come and go on Twitch, but none have been quite as divisive as the current ‘hot tub meta’. While it has seen a boom in viewership for some of the platform’s streamers, it has been the subject of plenty of ridicule and parody.

Regardless of which side of the fence you’re on, the latest adaptation of the hot tub meta is one of the funniest moments we’ve seen on Twitch so far this year. In order to “compete” with the massive audiences hot tub streamers are pulling in right now, Twitch partner ‘shaperka’ went for a Pokémon-themed twist by going for a full-body Magikarp cosplay, rather than donning a bathing suit.

For roughly five hours, sharpeka streamed from inside a Magikarp head piece, interacting with chat and even obeying commands for her to use the Pokémon’s signature, heavily-memed move Splash. In a change of pace to most other hot tub streams, shaperka was also cracking some cans of beer and even smoking cigarettes, all while keeping the Magikarp outfit on (the latter of which was particularly hard to do).

The highlights from shaperka’s stream have attracted a lot of attention and is definitely one of the best hot tub meta spinoffs we’ve seen so far.

i became a magikarp to compete with other hot tub streamers pic.twitter.com/pq9HQoU2C3

While shaperka was attempting to “compete” with the top streamers in the hot tub meta like Kaitlyn ‘Amouranth’ Siragusa, it may take her a few more outings in the Magikarp costume to get near that level of viewership.