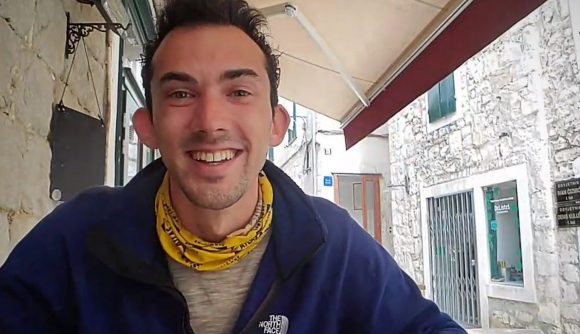 While stream sniping is often blasted by livestreamers as one of the most frustrating aspects of the job, there occasionally comes a wholesome sniper who’s out not to troll or annoy, but to give the streamer a proper laugh.

That’s exactly what happened when IRL streamer Trevor ‘Hitch’ Daneliuk, who is currently hitchhiking his way around Europe to finally end up at TwitchCon EU in Amsterdam. On the current leg of his adventure, Hitch is walking down a street in Split, Croatia, talking to his chat when a young man approaches holding a cardboard sign.

Hitch begins to laugh as the man nears, with viewers being able to just glimpse the message on the sign – “Subscribe for free with Twitch Prime” – before he casually strolls past the streamer without saying a word. Hitch continues to laugh as he continues his way up the street, saying that it was “the best stream snipe I’ve ever seen.”

While snipers of IRL streams often try to troll or make conversation with streamers, this guy was perfectly happy with his five seconds of Twitch fame. The original clip of the moment has been viewed around 50,000 times.

Hitch, whose elaborate route to TwitchCon sees him hitchhike his way through several European countries, is no stranger to bumping into some quirky individuals on his travels. However, there aren’t many that will have given him as good a laugh as this mysterious stream sniper.

Hitch has over 80,000 followers on Twitch, and his streams of his journeys consistently draw in between 1,000 and 2,000 viewers.