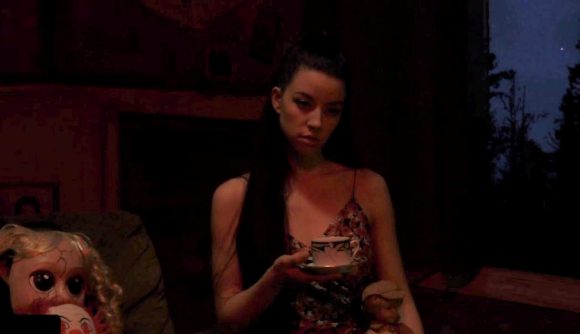 We’re now well on our way to Christmas, but for viewers of the official Twitch channel last night, it might as well have been Halloween. What started off as a weird Pokémon Sword and Shield stream in a creepy house with singer-songwriter Hana turned into a full feature-length horror film.

Hana sat down to play Pokémon at the beginning of the stream, which you can watch here, but neither she or Twitch provided any context for the madness that followed. For the first hour, the streamer played the game nervously, all while someone tried to get into the house, and the cameras kept flicking back and forth to strange rooms.

During the stream, which at its peak had 10,872 viewers, according to TwitchTracker, the singer had to read riddles and was subjected to multiple jumpscares. In fact, if you watch it closely enough, you’ll catch glimpses of various figures in the background or through the windows in the house.

And while we’re not sure what the stream was about, or even why it was broadcast so long after Halloween – or Hannaween in this instance – it takes a while to get going. But that seems to be the reoccurring theme with other haunted house streams, which Twitch has run in the past.

When Hana ‘leaves’ at the one hour mark, the camera focuses on the creepy doll room, where Dr Lupo’s stream is playing on a television on the bottom right of the screen. A radio newsreader says: “Catastrophe is on the rise as we have been informed that one in every 20 Twitch users have been affected by an unknown phenomena. Please remain calm as the anomaly has not yet been identified and reported to be spreading fast.”

Unless the unknown phenomena is Mixer coming in and stealing streamers, like EwOk, from under Twitch’s nose, we’re not sure we can actually explain this stream. It seems to have something to do with a child who killed their whole family with a knife over a doll, but other than that, we’re still as clueless as you are.

For some reason or another, two men are seen in the house and eventually end up ‘dead’ on the sofa next to Hana, where she and ‘Gail’ – the presumed murderer – drink a cup of blood while singing Ring a Ring a Roses. The stream offers no real conclusion, and raises a hell of a lot of questions. And it turns out that after three hours of exploring the horror house, Hana is just as confused about it as we all are.

I have so many questions for myself hahaha

Is this what happens when you play too much Pokémon? If so, I’m selling my Switch. Either way, I’m looking forward to Hana actually explaining what the hell just happened on her next stream.

Maybe then we’ll get some answers.