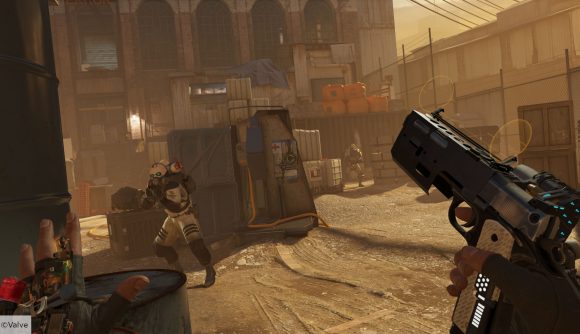 It’s been more than a decade since Valve made a Half-Life game, and now the series has made a groundbreaking comeback that looks set to redefine the expectations of what is possible with virtual reality gaming.

With Half-Life: Alyx looking set to be the real deal in terms of its story and VR gunplay, it’s the level of interaction with the world around you that has left players pretty stunned. From being able to play a functioning piano, to giving a live rat a cigarette, the ability to pick up and interact with pretty much anything is rather incredible.

The level of detail is so extreme that one Twitch streamer discovered in a now viral clip that you can even draw onto surfaces using marker pens – and he did exactly what you’d expect. On noticing the pens and an eraser on a window sill and an existing diagram etched onto the window pane itself, ‘Quin69’ knew immediately what had to be done.

“Oh my god, if this works,” he says, picking up one of the pens. “This is poggers if this works. If this doesn’t work, Valve sucks big dick and Gabe [Newell] is full of shit.”

But Quin69’s prayers are answered as he holds the pen up to the glass and begins to, of course, draw the unmistakable image of a crude cartoon penis.

Around 15,000 viewers watched as Quin69 finished his, erm, masterpiece, declaring: “This is the future!” The clip of his artistic skill has already been watched over 220,000 times.

On its release day yesterday, March 23, a peak of almost 300,000 people were watching Half-Life: Alyx content on Twitch.