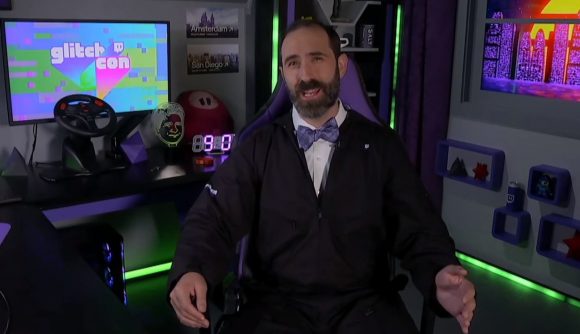 If you ask any creator what the biggest challenge streamers face is these days, the answer will be copyright. In recent weeks, the struggle between Twitch and DMCA takedown notices has dominated the headlines in the content creation world, forcing Twitch to scramble for solutions. Now, just days after issuing a written apology, Emmett Shear, the co-founder and CEO, has apologised again.

Shear made the remarks during his keynote speech at GlitchCon, an online-only conference set up to replace the two previously cancelled TwitchCon events this year. Although he only lightly touches upon the controversy, he notes that the team is working on delivering more solutions for content creators and that this is only the first step in a much wider plan.

“Including copyrighted material like recorded in your Twitch channel without authorization puts your channel at risk at receiving DMCA takedown notices from rights holders,” he says during his speech, which you can watch here. “This has always been the case on Twitch, but it wasn’t until recently that the music industry began heavily targeting archived content.

“If you receive a DMCA takedown, you should be able to know exactly what it was for and if you believe you were authorised, you should be able to contest the takedown. I think it’s a failing of our email to creators on October 20 that we didn’t include more of this information – it’s an issue with our current systems that we’re working to improve.”

Shear also goes on to reiterate the points made in the blog a couple of days ago, noting that new tools will be created to help creators deal with things in a much better way.

“We should have has better tools ready for you to manage your content and we wish we did,” he continues. “We’re sorry those tools weren’t available when you needed them and that so many creators had to delete their videos, capturing their communities best moments and accomplishment. Copyright law is complex and nuanced, but at the end of the day, things can and must be better for creators.”

While this doesn’t offer anything new to content creators, it is at least a public acknowledgement of the failings of the platform to deal with copyright issues. And it looks like the platform is planning on opening the floor up to the community too.

At some point early next month, Twitch plans to host a Town Hall event where several of the platform’s product team will be available to answer questions from the community. We don’t know when and where this event will be held just yet, but since this is such a big problem, expect the doors to be open to all.

We’ll go in-depth about what we’re doing and you’ll have the opportunity to ask us questions.

We’ll share more info on how to attend soon.#GlitchCon

However, not everyone was happy with Shear’s delivery. Several well-known streamers online say Twitch missed the mark with the keynote. No tangible solutions were given, music was hailed as having a successful year on the platform, and the DMCA apology formed only a small part of the overall scripted speech.

Casey ‘Lowco’ Flexhaug even went as far as to say that Shear’s message was “tone deaf, weak, and vague,” while Shannon ‘ShannonZKiller’ Plante says she believes we won’t see any solutions to the “DMCApocalypse” until 2021.

Regardless on where you stand on Shear’s message, one thing is clear: Twitch needs to do a lot more to appease its creators and the record labels if things are to move in the right direction for all.