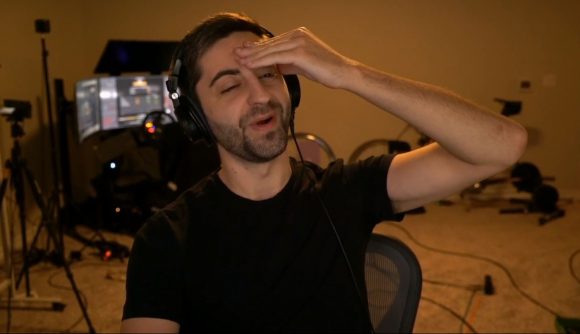 Twitch streamer Andrew ‘GiantWaffle’ Bodine has broken a Twitch record for the most hours streamed in a single month after going live for over 19 hours a day throughout the whole of November.

GiantWaffle surpassed the previous record of 569 hours set by ‘JayBigs’ in September of this year after hitting his goal of 570 hours. He even went on to extend his record to 572 hours and 41 minutes. During his record-breaking challenge, GiantWaffle played a total of 30 games and his most streamed titles were Rocket League, Bloons Tower Defence 6 and RuneScape. He also played some more obscure games such as Euro Truck Simulator 2 and Prison Architect.

On hitting his goal, a relieved (and extremely sleep-deprived) GiantWaffle says: “Oh my god, what a trip it’s been. What a goddamn month. This is by far the hardest thing I have ever done, which might sound weird but waking up after three hours of sleep thirty days in a row is absolute hell.”

Prior to embarking on his challenge, GiantWaffle revealed that he had been training himself in preparation for the long streams and had began to adjust his circadian rhythms so he could get the optimum amount of sleep.

All of GiantWaffle’s work seemed to be worth it as he saw his channel gain around 10,000 subscribers over his thirty day challenge.

He also achieved over three million hours of watch time and his thirty streams achieved an average viewership of 5,200 viewers.

You can see a full breakdown of all the stats from his record-breaking challenge in this spreadsheet which documents all of his thirty streams and shows a breakdown of which games he played throughout the month.

Following his achievement, GiantWaffle had one last thing to say, simply tweeting: “I love sleep.” Now which streamer will be crazy enough to try and break this record once more?