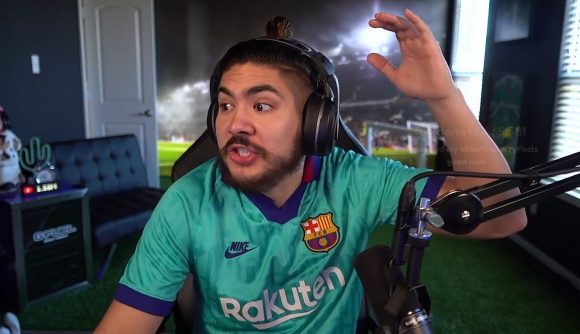 Castro’s channel became the 29th in Twitch history to reach the milestone when it ticked over the two million mark on November 27. The 28-year-old is by far the most popular FIFA streamer on Twitch, and promised his fans “a party” to celebrate the achievement. “Let’s go!” Castro shouts as he notices his sub count as he smashes in a goal with FIFA 20 Icon Luis Hernandez. “We did it! Just as I scored with El Matador… Yo, thank you guys. We’ll have a party on Friday, I promise. Yo guys, guys… I love you. I love you, I love you!”

When taking dormant channels (such as those of Tyler ‘Ninja’ Blevins and Michael ‘Shroud’ Grzesiek) and developer or tournament organiser channels (such as Riot Games) out of the equation, Castro is now the 24th most followed streamer on the entire platform.

Around 20,000 people were tuned in to Castro’s stream to watch the moment and spammed the chat with hundreds of ‘Vamos!’ emotes.

The most likely streamer to next hit the two million milestone will either be Spanish Fortnite streamer Manuel ‘LOLiTO FDEZ’ Fernández – who currently sits at 1.94 million followers – or French former Call of Duty pro turned streamer Corentin ‘Gotaga’ Houssein – who has 1.91 million followers.