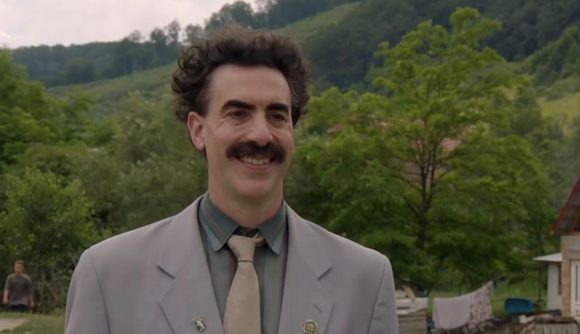 Kazakhstan’s most well-known ‘resident’, Borat Sagdiyev, and popular Twitch streamer Benjamin ‘DrLupo’ Lupo are set to stream together in a ‘battle for global supremacy’ according to Twitch. What does that mean? Who knows. What are they playing? Who cares. Fans are guaranteed to tune in just to watch the two personalities clash.

Borat is a fictional Kazakh journalist created back in 2006 by actor Sacha Baron Cohen, and he is known for saying intentionally crass things and pushing peoples buttons in humourous ways. It’s been almost 15 years since the world has heard anything from Borat, but today’s stream will help promote the new Borat film which is set to release on Amazon Prime on October 23.

DrLupo has recently been playing a lot of Escape From Tarkov, Fall Guys, and Among Us, so it’s hard to predict which games will be played during the stream. Whether it be an intense shooter or cutesy bean battle royale, the commentary is sure to ruffle a few feathers.

The original Borat movie in 2006 caused plenty of controversy. Baron Cohen faced a number of lawsuits from some of those involved in the film and it was received poorly in Kazakhstan, initially. It will be interesting to see how his controversial character will interact with one of Twitch’s nice guys in DrLupo.

For the first time ever, Kazakhstan's biggest gamer will go live on Twitch.

Very nice.#Borat faces off against @DrLupo in a battle for global supremacy, tomorrow October 20 at 3pm PT on https://t.co/GFgVyGvc4n. pic.twitter.com/LcICoesa5f