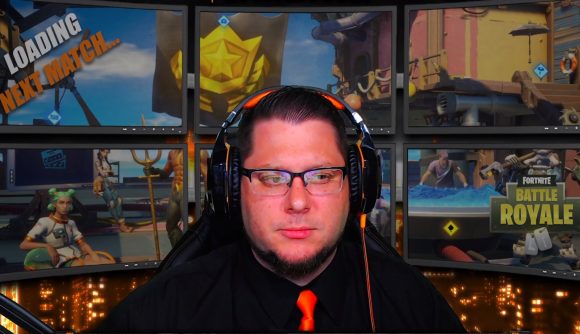 These days there are a lot of different people with varying interests that stream. From art to games to music, there is a genre for everyone and if you’re looking for a religious conversion while playing Fortnite, there’s also a content creator for that.

Dr Witnesser is a streamer who has taken to preaching about his interpretation of God’s word on Twitch. After allegedly telling a child that because he follows a different religion he will go to hell, Dr Witnesser has been banned from Twitch for seven days and may now be looking into legal action against the platform.

The clip, that was captured by Chelsey Harwood on TikTok and Twitter, shows Dr Witness telling a young Fortnite player on his team: “If you were to die with your sins today, you would be sentenced to hell.” This is despite the player telling him they are Muslim.

Shortly after this stream, Dr Witnesser was banned on Twitch for seven days. On Twitter, he posted a screen capture of the violation notice which states that the reason for the ban is “targeting others with repeated or severe personal abuse”. Witnesser’s tweet reads “I’m literally two seconds away from posting to my 251,000 followers on TikTok that Twitch bans Christian Twitch streamers for talking about what the Bible says on livestream. Are you part of the cancel Christianity culture now Twitch?”

Omg and this is only part of what he's saying to children and also those of other faiths @Twitch @TwitchSupport preaching to a Muslim child about Christian faith there needs to be a boundary here set by twitch if you are hosting him pic.twitter.com/IgEOfA7VpY

He later goes on to claim that he’s “looking into pursuing legal action against Twitch for religious discrimination”. He has not tweeted further about what his plans are, but the Christian is continuing to stream on the platform DLive while waiting for the ban to end – although he has expressed that he may continue to stream there in the future.

Other streamers and content creators have condemned his actions including Brett ‘Dakotaz’ Hoffman, another well-known Fortnite player. He responded to Dr Witnesser’s ban saying “Twitch made the right call. You shouldn’t be talking to other people’s kids about these things in random squads. Get a grip dude.”

I think you're out of touch @dakotaz We are told by #Jesus to go through the world and preach to EVERYONE, young and small. If you're not for Jesus, you are against him…

Dr Witnesser responds by calling Dakotaz out of touch, and that “we are told by Jesus to go through the world and preach to everyone, young and small. If you’re not for Jesus you are against him.”

Legal action against Twitch isn’t an uncommon thought process these days. The last time The Loadout reported on someone threatening Amazon’s streaming platform with legal action, a man wanted reparations for being exposed to “suggestive streamers”.