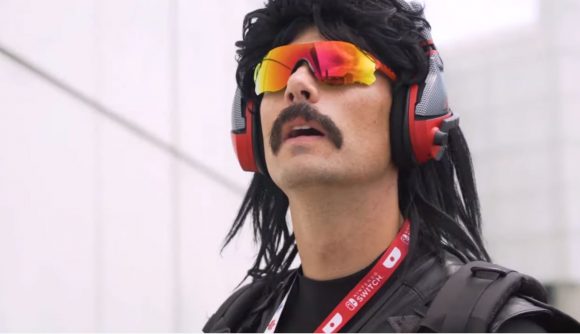 We all know that Dr DisRespect likes to wind up his fellow streamers on Twitch, and his latest target is popular variety streamer and Overwatch pro Felix ‘xQc’ Lengyel.

The Doc, who has been loyal to streaming Modern Warfare content since the game’s release last month, tweeted his disgust that xQc’s stream of Pokemon Shield was at one point attracting over 30,000 viewers. “I’m tired of seeing xQc sitting at 30k viewers playing Pokemon,” Dr DisRespect quipped. “This [Twitch] is my platform and you know it.” XQc was quick to respond, hitting the Doc with the tried and tested “OK boomer.”

XQc’s adventure through the latest region in the Pokemon universe, Galar, lasted over 15 hours and at its peak was watched by 32,479 people, according to Twitch Tracker. At the same time, Dr DisRespect’s Modern Warfare stream peaked at just 19,463; over 13,000 less than xQc. While the Doc’s tweet was likely in jest, it does highlight how Modern Warfare has struggled to keep up it’s initially high viewership that it experienced at launch.

In the last seven days, Modern Warfare has achieved lower average viewership across Twitch than the likes of GTA V and Hearthstone.

The initially hype around a number of new releases, such as Death Stranding, combined with a lot of frustrations from Call of Duty fans about Modern Warfare, seems to have caused a real dip in interest.

This is my platform and you know it.

This isn’t the last you hear from me.

While Dr DisRespect may still think that he is the king of Twitch, Modern Warfare is certainly not bringing in the numbers it was during its first week.

The two-time is currently the sixth most-followed active streamer on Twitch, while xQc is 30th.