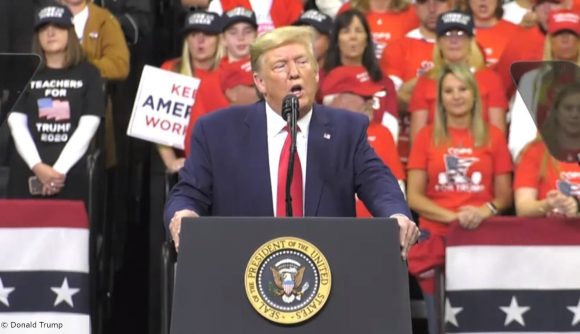 The president of the United States made his debut on Twitch last night, streaming the Minneapolis rally to approximately 18,000 viewers. Donald Trump isn’t the first American politician to join the streaming platform though, with Democrat Bernie Sanders fielding an account too.

And despite growing his page to 35,000 in a single day, his following has been trumped by Sanders. At the time of writing, the Senator, who is vying for Democratic nomination for president in 2020, has 88,780 followers on Twitch, compared to Trump’s 36,962.

Trump’s office has confirmed that the president will be streaming his 2020 campaign on the platform in an attempt to reconnect and sway younger voters for the next election. His decision to reach out to this audience in interesting though, no less so because the platform is owned by Amazon, a company which has come under stringent criticism from the president in the past, something that The Verge has pointed out in depth.

But the president might not get the best welcome on Twitch. Many gamers will remember his comments on gaming and violent exposure to videogames earlier this year. “We must stop the glorification of violence in our society. This includes the gruesome and grisly videogames that are now common place,” Trump said back in August.

That is a LOT of staff in chat. Don’t think I’ve ever seen that much on one stream pic.twitter.com/Di6wtqdTPb

Lots of Twitch staff were also spotted in chat during the stream, presumably to see what the reception to the rally would be. Moderators were also present for the stream, although the majority of spam comments left on the channel were left in tact.

It’ll be interesting to see how the president’s channel will be received in the next couple of weeks. But with the numbers of followers speaking for themselves, Trump can’t claim this one as fake news.