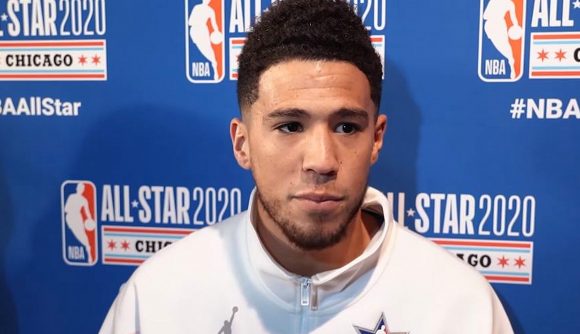 Professional basketball player Devin Booker was left stunned after he found out about the suspension of the NBA season while streaming live on Twitch with 100 Thieves founder and CEO Matthew ‘Nadeshot’ Haag.

In a clip from his stream last night, the Phoenix Suns star was enjoying a round of Call of Duty’s new battle royale mode Warzone when the subject of the NBA calling off the rest of the season came up. At first, Booker thinks it’s a hypothetical, before Nadeshot informs him that the NBA has made the call for real.

“All of the NBA is suspended,” Nadeshot says over voice chat. “Devin, I’m sorry brother, but you just heard it from me.” After Booker says “it really might be,” still not realising it’s been officially announced, Nadeshot clarifies that the league actually has been suspended. Booker then gets verification from a friend on-camera, and proceeds to have a minor freak-out, asking “what the fuck is going on, bro.”

The National Basketball Association made the shock announcement late March 11 after Utah Jazz player Rudy Gobert tested positive for coronavirus before a match against the Oklahoma Thunder.

There have been numerous similar announcements from within esports. Rocket League cancelled its World Championship, Overwatch homestands between March and April have been postponed, and the ESL One Los Angeles Dota 2 major will also now be rescheduled.

One thing that hasn’t been interrupted any is the release of Call of Duty Warzone. The latest battle royale shot straight to the top of the Twitch charts when it publicly launched Tuesday, peaking at over half a million viewers across the platform.

The coronavirus has been considered a pandemic by the World health Organization, and the ensuing disarray from suspensions, cancellations and rescheduling is unlikely to slow down for the time-being.

{"schema":{"page":{"content":{"headline":"Devin Booker finds out about the NBA season’s suspension from Nadeshot","type":"news"},"user":{"loginstatus":false}}}}