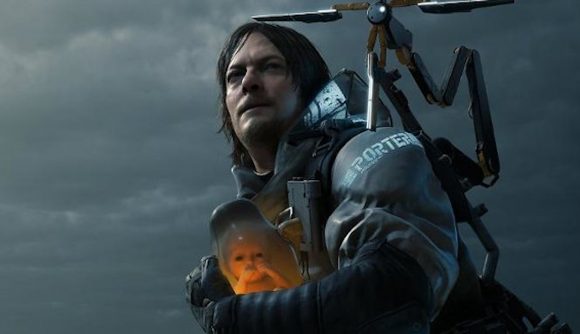 Death Stranding his risen to the top of the most viewed chart on Twitch following the release of Hideo Kojima’s latest epic. With more and more streamers going live to share their experience on the open-world action game with their viewers, many are discovering some interesting quirks.

Elspeth ‘Elspeth’ Eastman, who you’ll know for doing the voices for many videogame greats, including Tristana in League of Legends, got told off by Sam Bridges, aka Norman Reedus, in game because she stared at his crotch for too long.

In Elspeth’s defence, the streamer, who has over 157,000 followers on Twitch, originally started out looking at Bridges’ feet (although we’re not sure if that’s worse), but as the shaky third person camera moved further and further up, Elspeth found herself quietly lingering over his lower half as he perched on a bed.

And well, it’s fair to say Bridges didn’t take too kindly to it. After lingering slightly too long on the first go, Bridges puts his hands over his crotch to hide his dignity. Elspeth responds only with an “oop” in the clip, which you can watch below, but her body language suggests she knows exactly what she’s doing.

Bridges hides his dignity for a second time, before giving Elspeth and her many viewers the middle finger, and eventually a punch.

So there you have it folks, despite the fact Bridges can urinate in the middle of nowhere, he doesn’t like you staring at his crotch – so don’t do it.