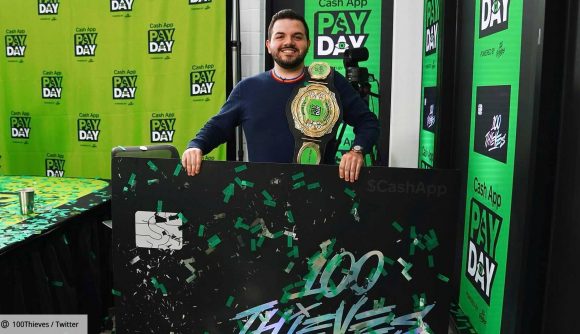 100 Thieves co-owner Jack ‘CouRage’ Dunlop has been crowned the winner of the Cash App ‘Pay Day’ Uno tournament. The event saw some of the biggest streamers and content creators duel it out for the lion’s share of a salivating prize pool of $350,000 worth of Bitcoin, with even 100 Thieves CEO Matthew ‘Nadeshot’ Haag himself throwing down for a chance at winning the crypto cash.

The tournament topped off a day chock full of content, from musical performances, to podcasts, to trivia. Hosted by ‘AustinShow’, 16 teams featuring stars such as one of the biggest female streamers Rachel ‘Valkyrae’ Hofstetter, current Twitch subscriber record holder Ludwig ‘Ludwig’ Ahgren, and last year’s champion Edwin ‘Castro_1021’ Castro, took to the table.

An intense finale saw the Botez Sisters, the duo of Valkyrae and Bella Poarch, and CouRage face off. CouRage came close initially, asserting an Uno which was swiftly scuppered by a pick up two penalty card from the Botez corner. Moments later, he was down to a single card yet again, only to be penalised for two by the Botez’s once more.

With each player’s hand slowly growing, it appeared that the game would never end, though a fortunate reversal freed CouRage from the Botez onslaught long enough for him to dodge yet another pick up penalty. Having whittled his hand down to Uno once more, CouRage closed out the match.