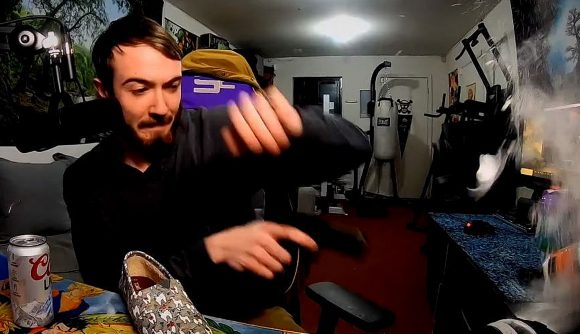 A Call of Duty streamer has been suspended by Twitch and dropped by his organisation after accidentally firing a pistol during a livestream.

Carl Riemer, who has now been removed from SoaR Gaming and was once a popular trickshotter for FaZe Clan, admits he was “clearly intoxicated” when he attempted to empty the magazine of his Glock, but the streamer ended up firing a round. According to Riemer, the bullet passed through a steel drinks cup before flying into a “$1000” PC monitor that was out of vision from his facecam. The impact of the bullet sprayed whatever drink was in the cup over his entire set up and blew the lids of two tubs of G FUEL powder.

The length of Riemer’s suspension from Twitch is currently not known. The platform’s Terms of Service lists “the use of weapons to physically threaten, intimidate, harm, or kill others” as a “zero tolerance” offence that results in an indefinite suspension.

Riemer has now posted an apology video – which also contains a clip of the incident – for his “stupid mistake” and and says that SoaR did the right thing by releasing him from the organisation.

He also says that, despite his sizeable following and past popularity on YouTube (where he has over 800,000 subscribers), videos were not pulling in the same kind of income they once did and that his livelihood depended solely on his Twitch streams.

Riemer’s Twitch channel has over 100,000 followers, but he admits that if his suspension is permanent he may move to YouTube to try and continue his streaming career.