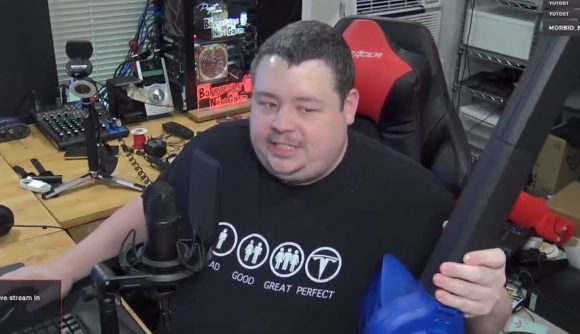 There’s having noise cancelling filters and then there’s RTX voice. The new NVIDIA plugin, which utilises the AI capabilities of NVIDIA RTX to remove distracting background noises from your broadcasts, has become an overnight hit, thanks to one streamer and his leaf blower.

Barnacules, a former Microsoft engineer who know runs his own tech channel on Twitch and YouTube, put RTX Voice to the test last night on his stream and discovered it can cut even the loudest noises from broadcasts without sacrificing voice or broadcast quality.

To show this, the streamer turned on a leaf blower during his broadcast last night, but within seconds of putting RTX Voice to 100%, the sound of the garden tool disappeared, leaving Barnacules’ dulcet tones to take the mic. This clip has been widely shared online, and by a number of other streamers, including Ben ‘DrLupo’ Lupo.

He also tested the plugin by hammering his desk, which provided the same results.

Nvidia’s RTX Voice tech looks AMAZING. I can finally use a desk mic again with my mechanical keyboard! @Barnacules‘s test with the fan and hammer is so impressive https://t.co/ES7ELMiMQS pic.twitter.com/PCiA0DRcpW

NVIDIA RTX Voice entered early-access beta for RTX users this week, and despite being locked to RTX users, there is already a workaround for GTX owners according to a new report published by David Lake of the Guru of 3D forum.

The app works like magic, so gone are the days where you’ll need to listen to someone tap, tap, tapping away on their mechanical keyboard during a stream or conference call. Happy days.