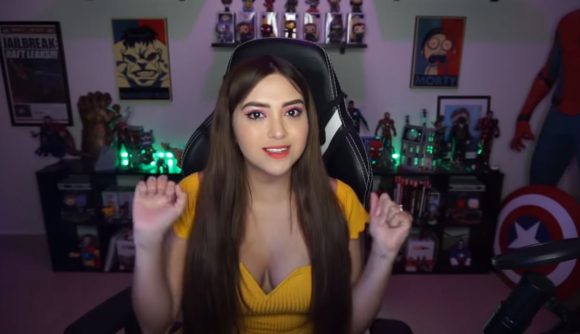 Abril ‘AriGamePlays’ Garza Alonso, a popular Mexican streamer, has another week left on her Twitch ban for streaming ‘sexually suggestive’ content. The streamer was banned for 30 days on October 18, while streaming with two other people.

AriGamePlays is the second biggest female streamer on Twitch with over 1.35 million followers, topped only by Imane ‘Pokimane’ Anys and her army of 3.5 million followers. It’s not clear how this ban will affect her position in the rankings, but she could claim the top spot if the rumours about Pokimane moving to Mixer are real.

In a tweet which was sent shortly after the ban, Arigameplays says that Twitch does not value its creators, that she did nothing at all, and that she will start to look for other platforms if this carries on. She even joked that to get banned, all she needed to do was breathe.

A few days hours later however, she confirmed that she had spoken to her “Twitch angel” to find a solution going forward. She has been streaming on nonolive, a popular Spanish streaming platform in the meantime.

Sexually suggestive content, which is judged based on behaviour and commentary, reaction to content, attire and environment, camera framing, stream attributes, and channel content, is against the streaming platform’s community guidelines. A number of streamers who have fallen foul to bans have blasted Twitch in the past for its lack of guidelines on what type of clothing is and isn’t allowed on stream.