It’s safe to say that we’ve seen some ambitious, leftfield, and often completely ridiculous formats when it comes to esports tournaments and competitions. Sometimes, when there’s so many stages, brackets, regions, qualification methods, and points systems, you just need someone to lay at all out for you in simple terms.

Well, the Valorant Champions Tour appears to be one of those competitions that needs some explaining. While it is certainly not the most complicated out there in terms of its format and structure, its year-long duration, open qualifiers, and regional tournaments have left people a little confused as to how it all works.

In a nutshell, the Valorant Champions tour is an 11-month-long competitive structure that is open to anyone ranked Immortal 1 or higher in the Valorant ranks.

Challengers are regional open qualifiers, where teams compete for not only prize money but spots at Masters events.

Masters events are essentially majors, which in normal circumstances would be international LAN tournaments. However, due to the pandemic, they are currently regional online tournaments. Nevertheless, they’re still very important, as teams who make it to Masters compete for bigger prize pools and VCT Points. VCT Points are used to qualify for Champions.

Champions is the climax of the entire season, with only the best from each region being able to attend. It will have a big prize pot and one team will be crowned Valorant world champion by the end of it.

While the majority of teams will qualify for Champions based on their VCT Points total, there will also be last chance qualifiers in some regions, where the winners can book themselves a Champions place.

Below is the rough schedule of the 2021 Valorant Champions Tour. 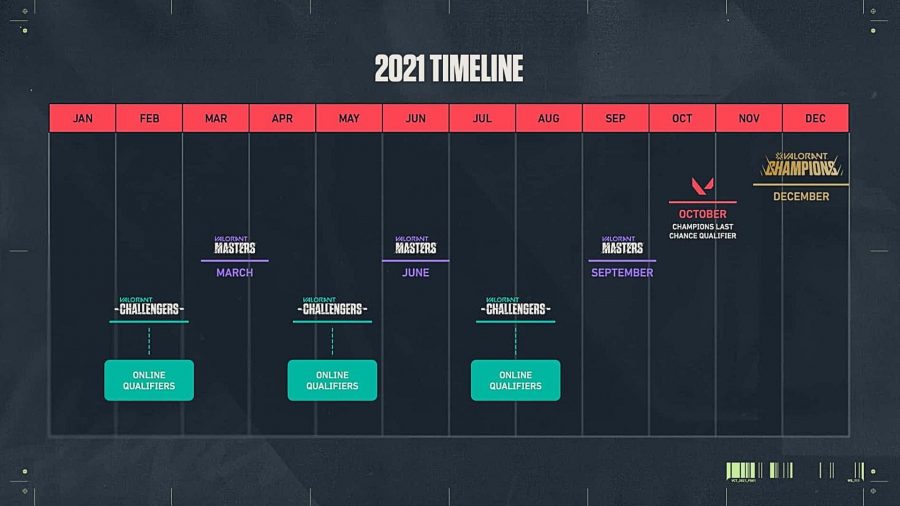 As you can see above, the VCT is split into four stages. Stages 1-3 each hold three Challengers and a Masters, while Stage 4 includes the last chance qualifiers for Champions, and Champions itself.

For online competition, there are 11 regions in the Valorant Champions Tour. For international offline events, some regions are combined to create a total of seven regions.

Below is a full list of VCT regions. Regions that are rolled into larger regions for international events will have that shown in brackets.

Qualification to each level of the Valorant Champions Tour can be a little confusing, so we’ll try to break it down for you.

This means that, in their current online form, each region’s Masters event will feature eight teams.

This will change, however, if they eventually become international LAN tournaments, as they should be in a COVID-less world. International Masters events will feature 16 teams, with varying allocations of spots for each region.

There will be a number of methods to qualify for Valorant Champions at the end of the year.

The main way is to have the most VCT Points in your region. VCT Points are earned through performances at Masters events. The higher you place, the more points you get.

There will be certain allocations of teams coming from each region. For example, NA has two spots at Champions allocated for it via VCT Points, so the top two NA teams in terms of their points tally will qualify.

Finally, there is a place reserved for the winner of the Stage 3 Masters – but this rule will only apply if it is an international LAN. If Stage 3 Masters is an offline regional event, it is currently unclear how that spot will be filled.

Riot is yet to announce the total amount of prize money on offer throughout the entire Valorant Champions Tour, but it’s going to likely surpass $2 million.

Challengers and Masters tournaments have varying prize pots, depending on the size of the region. NA and Europe events boast the biggest prize pools.

There will likely be a massive prize pot for Champions at the end of the year, but we don’t know how high it’ll be just yet.