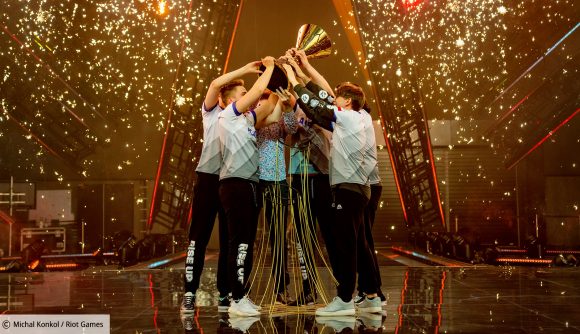 EMEA second seed Acend has overcome Valorant Champions Tour Berlin champion Gambit Esports, and been crowned the winner of VCT Champions 2021. With Acend taking the series 3-2 in games over the course of an intense five-game banger of a series, the team has recorded its name in the annals of Valorant history as its inaugural world champion.

According to Esports Charts, over one million people were tuning in at the final’s peak, with the series averaging 469,083 viewers – a testament to the monstrous growth of Valorant esports over the course of the year.

Acend made a dominant run through the event, easing past Team Secret 2-0 in the quarterfinals, before dominating fellow regional representative Team Liquid 2-0 in their semifinals tie. However, today proved a far greater challenge for the team, with both sides winning their map picks. In the end it all came down to Split, which Acend took convincingly 13-8 on rounds.

Acend’s victory also marks the third time the team has taken down Gambit across all competitions. Last month’s Red Bull Home Ground 2 quarterfinal matchup saw Acend sweep the all-Russian squad, while the VCT Stage 3 EMEA upper bracket semifinals also went Acend’s way – though the team was later defeated by Gambit in the lower bracket final. As such, we were always in for a close series, and were treated to five top-quality games.

With Riot Games having already announced big changes to the VCT format are on the way for 2022 – including an expansion of its Game Changers circuit and the introduction of grassroots tournaments – the future is looking incredibly bright for the scene.