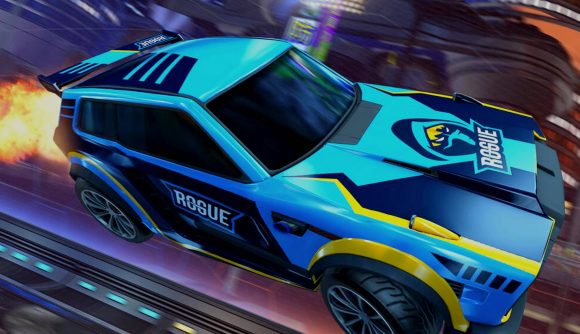 Another set of Rocket League esports decals are set to be added to Rocket League’s in-game Esports Shop tonight. The new decals will showcase the away kit colours for all the Rocket League Championship Series (RLCS) teams currently in the competition, alongside the addition of the home kit decals for Complexity and Misfits Gaming – new additions to the RLCS this season.

The new Rocket League esports decals will be included in the next title update, which is scheduled to go live on all platforms at 4pm PST / 7pm EST on January 25 and midnight GMT on January 26.

RLCS fans have been waiting a long time for news on the addition of Away Kits to Rocket League’s Esports Shop and Psyonix has finally revealed when we can expect to see them – and, more importantly, what they look like.

All 36 teams, from Dignitas to Complexity, to Team BDS will have both a home and an away decal following this update. All of the new decals have been designed by the teams themselves, so there are some fantastic designs available.

Like the Home Kits, players will be able to equip any of these decals on the best Rocket League cars – the Octane, Dominus, and Fennec. You can check out all the new Rocket League esports Away Kit decals here.

The release of these new Rocket League esports decals coincides with the continuation of the North American RLCS Winter Split. The Rocket League 351 regional is scheduled to take place over the weekend so there’s no better time to jump into a game sporting your team’s colours!