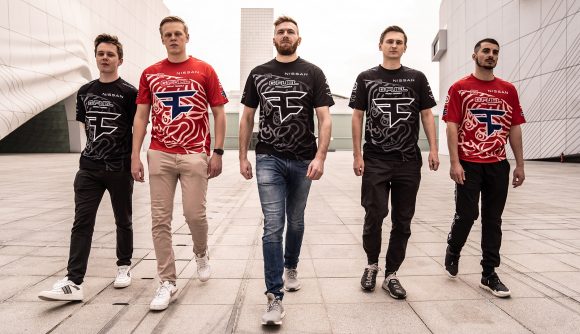 With the PlayerUnknown’s Battlegrounds Global Invitational.S well underway, one of the tournament’s biggest teams, FaZe Clan, has today announced a special jersey collaboration with developer Krafton.

The jersey celebrating PGI.S – which is currently taking place in South Korea – “comes in black or red, and features the iconic FaZe Clan and PUBG logos as well as a tiger decal to pay homage to the PGI.S 2021.” This is also a significant moment, as it marks the first time an esports organisation has had the chance to work with Krafton on official merchandise.

“We are honored to be the first esports organisation to work with Krafton on official merchandise, and further FaZe Clan’s presence within the community,” says FaZe’s head of esports, Erik Anderson. “The passion our fans show on a daily basis is what drives us here at FaZe, and we hope they’ll love what we’ve cooked up for them to wear while they’re cheering for the team any given FaZe Sunday.”

Meanwhile, Krafton’s head of esports in EMEA, Atila Yesildag, says that “we have enjoyed collaborating with FaZe Clan to create official merchandise for our community. This is another exciting development in a busy year for PUBG esports, and we are looking forward to seeing fans wear their new jerseys with pride.”

Those eager to get their hands on the jerseys – which are going for $70 a piece – better act quick, though, as they will only be available to buy for a 72-hour period from FaZe’s website.

Of the massive PGI.S prize pool – which currently sits at over $7 million thanks largely to revenue from item sales – FaZe has so far taken home just over $200,000 of it. Now into the final Weekly Final, the team of David ‘Fuzzface’ Tillberg-Persson, Ivan ‘ubah’ Kapustin’, Ludvik ‘Aitzy’ Jahnsen, and Gustav ‘Gustav’ Blønd will be eager to win itself a bigger slice of the pie.