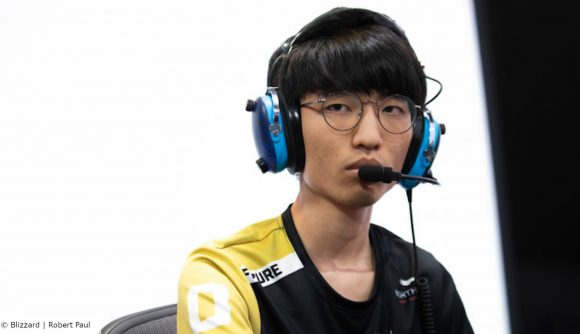 A professional Overwatch player, who is coming back out of retirement to play for the Vancouver Titans, has been fined $3,000 by the Overwatch League. Baek ‘Fissure’ Chan has been handed the fine for telling the public that the controversial Role Lock mechanic was coming to Stage Four of the 2019 season.

The Overwatch League takes discipline very seriously, with players being fined and suspended for toxicity, foul language and account boosting. Fissure’s punishment was listed on the Overwatch League Discipline Tracker on November 26 for “sharing confidential League information,” and its currently the first punishment of its kind.

Talking to his stream shortly after his retirement in June, the then-Soeul Dynasty player revealed that the mechanic would be used in Stage Four of the 2019 season. “I’m retired now, so I’ll say it,” Fissure said during his stream, according to a translation on Reddit. ‘Next stage, four, 2-2-2 lock is confirmed.”

And although Fissure broke League rules, the introduction of Role Lock was one of the worst kept secrets in the game. A number of media outlets and influencers had reported that the mechanic was going to be added to Overwatch, but Blizzard remained silent on the rumours.

That was until Fissure’s leak. Watchpoint, the official preview show for the League confirmed the addition of Role Lock on July 18, which was then followed by Blizzard a few days later.