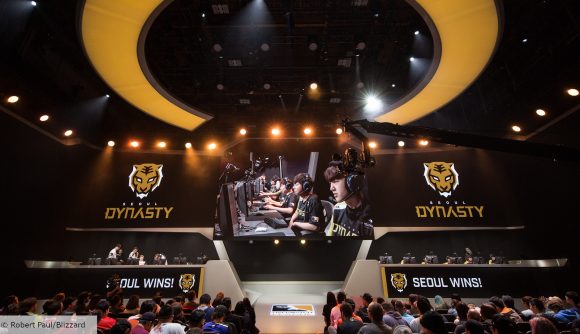 You don’t have to be a big esports fan to know that the global pandemic has had a crippling effect on the way events have been run this year. Plans have had to be changed, games have been shifted online, and operations teams have had to think of innovative ways to ensure competitive integrity is upheld. It’s been a struggle for many tournament organizers, but luckily for Blizzard, its dedicated Overwatch League and Call of Duty League teams have been able to lean on one another.

Both leagues have made changes to the formats over the course of the pandemic, pivoting to an online-only season away from the traditional homestands. The leagues have also both experimented with exciting tournament-style events, which pulled in bigger crowds than normal, helping restore some order to what has already been an interesting year for the industry.

“I really love working with the folks over there,” Mierzejewski tells The Loadout. “Being able to work alongside them with two different products but with the same goal to elevate players on a global scale is great. We have the same mission statement in a lot of ways and having someone to work with and bounce ideas off is really fun and much needed.”

The shift to tournaments was something that the Call of Duty League first toyed with, so the Overwatch League operations team was keen to build on that success.

“I talked to their ops team and asked them how they did it, why they did it, and what came as a result of that is what you saw,” he says. “They had a different post-season to us in some ways but we worked with them in how they seeded their tournament.

“We said for the OWL, we want all teams to have the opportunity to qualify for the post-season, and the way we did is make sure we were giving advantages to the teams that had the highest seeds. The CDL did the same thing – they gave a very hard path for their bottom seeded teams to make it through their double elimination bracket, so we did a similar thing with our knockout rounds.”

Shifting the format of a league to keep teams and viewers entertained is no mean feat, but luckily for Blizzard’s esports teams, they didn’t have to do it alone.

The Call of Duty League and the Overwatch League might look and feel different – but they both have operations teams at the center working to make things as smooth as possible for all involved.