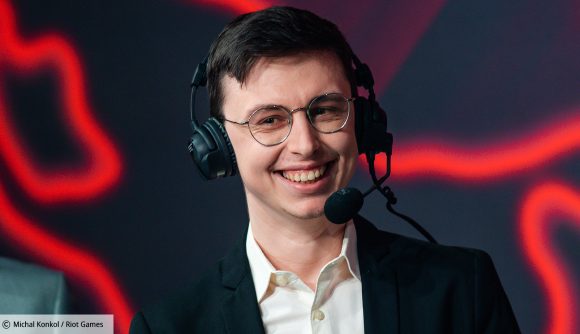 After a well-earned break, League of Legends caster, analyst, and Excel Esports content creator Marc ‘Caedrel’ Lamont is refreshed and raring to get back on the grind. The Brit has also returned armed with a pretty good idea of how the MSI 2022 knockout stage is going to pan out (spoiler alert: he’s backing T1 to take it all). With that said, he reckons LEC titan G2 Esports is still in with a chance to upset the LCK invincibles in tomorrow’s semifinal grudge match.

While today’s matchup between Evil Geniuses and Royal Never Give Up went according to Caedrel’s 3-0 prediction, his crystal ball is far fuzzier when it comes to getting a read on the tie between G2 Esports and T1.

“My heart wants G2 to win, but my head says T1,” Caedrel tells The Loadout with an anguished look on his face. However, the caster highlights the one key weapon up the samurai’s sleeve that could unlock the path to victory against the LCK juggernaut: unconventional picks. From Victor ‘Flakked’ Lirola’s Sion bot lane, to Rasmus ‘caPs’ Winther and Sergen ‘Broken Blade’ Çelik lane swapping, Caedrel believes messing with T1’s gameplan could make up for deficiencies in raw gameplay.

“They put their hand in the hat, pull something out, and if it works, it sticks,” Caedrel says. “And that’s a really scary thing for T1, because I think Korea as a region is very checklist-y in that its teams go through an array of steps on how to play the game very slowly, very methodically. If you throw a spanner in the works they seem to kind of lose it a bit, and they either think that it’s not strong, and they’re convinced that they can beat it, or they try to play it and fall over themselves.”

Of course, Caedrel knows full well that G2 will have a lot of different options prepared, and reckons head coach Dylan Falco “won’t be sleeping” as he furiously pens his playbook ahead of the clash. There are, however, two potent picks which he hopes G2 will consider if it doesn’t get whacky with the draft. “Dylan, if you’re out there, pick Ornn, pick Rakan, pick these two champs at least once every draft and they [the team] will be alright,” he implores.

Currently the third-most-picked toplaner at the tournament with 13 appearances, Ornn has gradually become more and more prominent in the draft throughout the Rumble Stage as MSI’s teamfighting meta has established itself. Rakan meanwhile has had a similar trajectory, featuring 11 times across the tournament to date – the fourth most popular support pick.

This duo could have a huge impact on G2’s chances, as both can be utilised by Broken Blade and Raphaël ‘Targamas’ Crabbé to help unlock caPs more and more throughout the game. Putting caPs on hard carries, rather than picks like Corki, is what Caedrel feels needs to happen in order for the team to fire on all cylinders. Considering the Dane’s exceptional run of form throughout MSI 2022, we simply have to agree.

For now, all we can do is sit, wait, and enjoy what is surely going to be an intense series when G2 and T1 meet on the Rift tomorrow, May 28. You can check out our full, extended chat with Caedrel where we also discuss his break, the influx of new broadcast talent in the LEC this year, and his take on MSI’s format when it drops over the next couple of days.