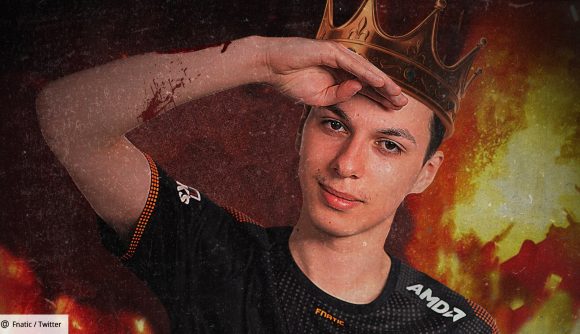 Much of the focus on Fnatic’s 2021 LEC Summer Split preparation has revolved around Gabriël ‘Bwipo’ Rau’s surprise role swap from the top lane into the jungle, and how he will fare against more established opposition. As such, much less has been said about his replacement.

With Bwipo taking on a new role, Fnatic’s recruitment team flexed its muscles, bringing in Adam ‘Adam’ Maanane from EU Masters 2021 Spring champion Karmine Corp. With only one split in a tier two league under his belt, the young Frenchman is every part the rookie. However, the quality of his performances while playing in La Ligue Française – and indeed on the international stage – clearly caught the attention of Fnatic’s scouts. And his new teammates also think there’s something about him.

As part of an upcoming exclusive interview with The Loadout, Fnatic botlaner Elias ‘Upset’ Lipp tells us that “the talent is definitely there.” According to Upset, Adam’s personality is “a bit calmer” than Bwipo, and is “bringing in some relaxing vibes” to the team.

“It’s good for the team to have somebody calmer,” Upset says, “because I talk a lot, Zdravets ‘Hylissang’ Galabov talks a lot, and Bwipo and Yasin ‘Nisqy’ Dinçer are the same way. So having someone with a more reserved personality is quite a nice fit.”

Only 2 days till there's a new king on top…🔥

The new kid on the block, Adam has an opportunity to match up against Europe’s elite. However, he still has a lot to learn to avoid getting schooled by top opposition. Fortunately, according to Upset, “he has been showing a lot of willingness to learn and listen.”

To Upset, Adam “just needs a little bit of time to take the learnings and gain experience”, but “he’s on the way to becoming a very good player.”

We’ll get to see Fnatic’s new toplaner in action tomorrow when the team takes on Misfits Gaming in its first game of the 2021 LEC Summer Split. Until then, keep an eye out for the full interview with Upset, which is dropping soon.