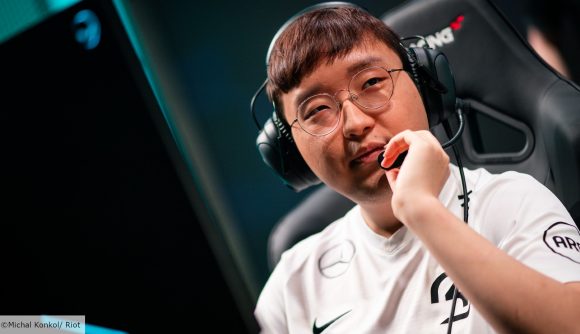 Later this month, SK Gaming will battle for a spot at the League of Legends World Championship in the LEC Summer Playoffs. However, if SK makes it through the losers bracket and bags a Worlds spot, its South Korean jungler Kim ‘Trick’ Gang-yun looks set to miss out.

According to ESPN’s Jacob Wolf, all LEC teams were asked by Riot in July to send over players’ passport information in order to kickstart the process of getting visas early. With Worlds being held in Shanghai this year amid the ongoing coronavirus pandemic, preparations need to be particularly tight and thorough to ensure all players can travel to China. However, SK Gaming reportedly sent passport information over to Riot very close to the deadline, and when Riot looked at Trick’s passport it noticed it had less than six months until it expired.

China will only grant visas to those with a passport that has more than six months left until its expiration date, and with no time for Trick to seek help from his native South Korea before Riot’s deadline, he will now allegedly not be travelling to Shanghai with SK if it qualifies.

Trick has been a key member of SK’s roster since joining in the offseason before the 2020 Spring Split. He is expected to keep his spot on the team throughout Playoffs, but will be replaced by German substitute jungler Marc “Canee” Behrend who was picked up at the beginning of August, according to ESPN’s sources.

If SK makes it to Worlds, Canee will be making his first appearance for the team at the LoL season’s biggest event, even before he makes his LEC debut.

Trick has appeared in two World Championships previously, both with G2 Esports, in 2016 and 2017.