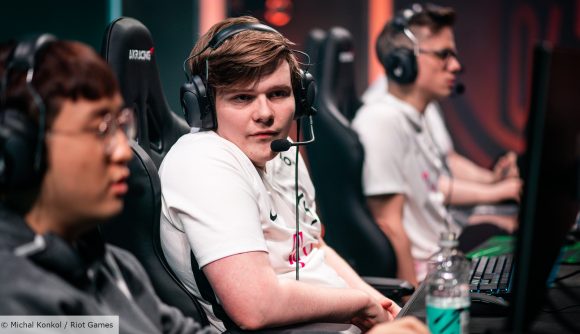 Let’s face it, being an SK Gaming fan isn’t easy. The League of Legends team didn’t put up much of a fight in the LEC last split, but the organisation recognises that. To try and post better results, SK has made some pretty big changes to its lineup and it’s also taken a leaf out of G2 Esports’ book – by asking one of its players to switch roles.

That’s right, Janik ‘Jenax’ Bartels will be ditching the mid lane for the top lane come the Summer Split. According to SK’s latest blog, the swap was already being considered during the Spring due to Jenax’s deep champion pool, but it’s only now that the transition has been formally agreed.

“Swapping to top lane is something that has been in the back of my mind for a little while now and I feel like now is the correct time for me to make the swap,” Jenax says. “I think my mid lane champion pool has always had some similarities with top lane and I particularly enjoy playing champions that suit my playstyle. I have also always played a significant amount of top lane in SoloQ throughout my career.

“I am very confident in my gameplay, to the extent where I am ready to compete at the highest level in the LEC. I put a huge expectation on myself to perform and based on the SoloQ I played in the last few months, I can confidently say that this swap will enable me to show my potential in this new role. I am very excited for everyone to see it once the split starts!”

To fill his role in the mid lane, SK Gaming has brought on Dirk ‘ZaZee’ Mallner, an EU Masters 2019 Summer Champion who earned his stripes in the European Regional Leagues.

“I am confident that in time I will become a force to be reckoned with in the LEC,” ZaZee says. “Since the LEC is one of the best leagues in the world, it will take some time and a lot of work to catch up with the top teams. However, as a short term goal I am aspiring to get to the playoffs as an underdog which is where I find myself most comfortable.”

But those aren’t the only changes. SK Gaming also has a new head coach in the shape of Jesse ‘Jesiz’ Le, a former player who knows the organisation well from his playing days there.

We won’t have long to find out how the new team fare. The LEC Summer Split starts on Friday, June 12 when SK face Origen.