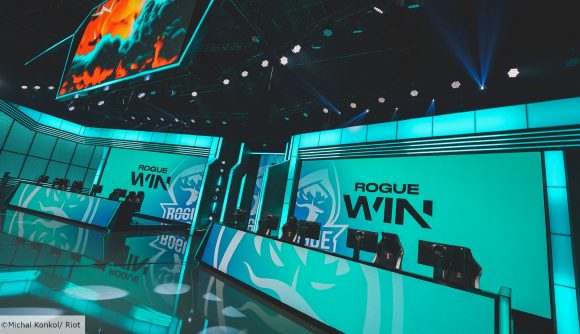 Rogue has become the first League of Legends team to qualify for the 2020 World Championship after pipping MAD Lions to the top spot of the Summer Split regular season.

Despite losing to Team Vitality on the opening day of the Summer Split Super Weekend, Rogue recovered to beat Origen and, crucially, MAD Lions, to finish as top dog and guarantee a spot at Worlds, which kicks off next month in Shanghai. Despite leading the field for the majority of the split, MAD Lions had to settle with second and will now have to earn a Worlds spot in the Summer Split Playoffs.

The other four teams joining Rogue and MAD Lions are Spring Split champions and 2019 Worlds runners-up G2, Fnatic, SK Gaming, and, miraculously, Schalke. According to LoL Esports Stats, Schalke had just a 9% chance of reaching the Playoffs in the final weekend of fixtures, and thanks to a mental 3-0 weekend with wins against Vitality, MAD Lions, and Fnatic, as well as other results going its way, Schalke completed what was being billed as a “miracle run.”

Congratulations to @Rogue on being the first team to qualify for the 2020 World Championship! #Worlds2020 pic.twitter.com/np6V1eIV2b

The team just a few weeks ago was living at the bottom of the standings, but seven consecutive victories in the last seven games saw them go from 1-10 to 8-10 and squeak a Playoffs spot.

WE DID IT!!! PLAYOFFS BABY! pic.twitter.com/ZlqGYtOxAE

The Summer Playoffs, which kick off on August 21, will see four of the six teams secure spots at Worlds. The top three will go straight to the group stages of Worlds, while the fourth-placed team will have to battle through the Play-Ins to get into the groups.

The European region will have the joint most representatives at Worlds, alongside Chinese LPL teams.