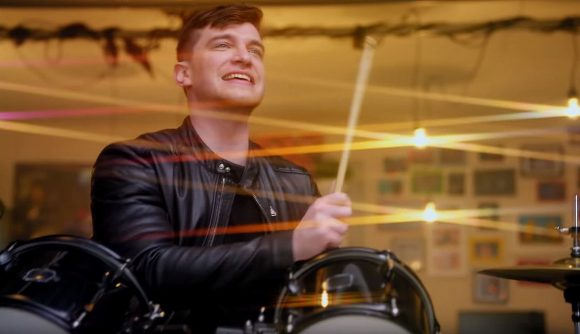 In what is a essentially a sponsorship announcement for car manufacturer Kia, who will continue to be one of the LEC’s main sponsors in 2020, on-air talent Andy ‘Vedius’ Day, Aaron ‘Medic’ Chamberlain, and Daniel Drakos come together to form their own band, LECtronic, and their first ever track is this one, ‘I Want the LEC Back’. In the rather moody opening to the music video, the casters long for the return of European LoL, before the rest of the video descends into some more uptempo and generic music video shots filled with plenty of Kia product placement and other members of the LEC team dancing around them.

The bizarre track, which features lines such as “I want the LEC back so I can spam in the chat” and “I want to talk about who threw, I want to flame on Reddit,” features vocals from the three main members of the band: Vedius on guitar, Medic on drums, and Drakos on keyboard.

While Drakos and Medic’s instrument playing is fairly obviously mimed, the latter did reveal on Reddit that the guitar solo in the second half of the track was actually performed by Vedius. “Vedi did the solo himself,” Medic says. “Dude’s a beast.”

This very original way to announce a sponsor and generate hype for the LEC appears to have gone down brilliantly with fans.

The Spring Split of the 2020 LEC season kicks off in just ten days time on January 24 where G2 Esports will take on MAD Lions in the opening fixture.