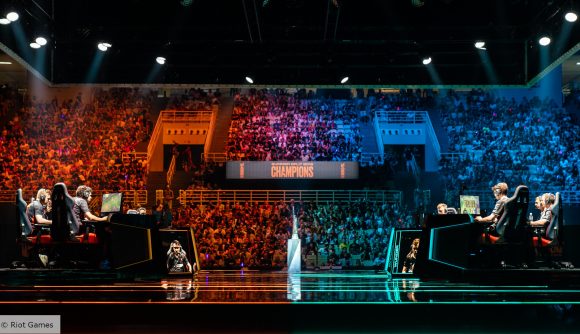 Every competitive League of Legends fan has a preference when it comes to which region they support – it’s no different here in Europe,  but despite a number of well-loved and veteran players leaving for NA in the offseason, the head of esports at Riot Games EU insists it shouldn’t be a concern.

The 2020 LEC kicked off last weekend without some of its most-recognised faces. The likes of Mads ‘Broxah’ Brock-Pedersen, Daniele ‘Jiizuke’ di Mauro, and Kasper ‘Kobbe’ Kobberup will be spending their year in the North American LCS – something fans perhaps didn’t expect right after EU’s success at Worlds.

However, Alberto Guerrero, the head of esports at Riot Games EU wants fans to see the positives and be proud of the European players performing in other regions. The LEC is, after all, the perfect place to nurture new talent.

He says: “There are a few who leave every year, and yes, in total there are a lot of Europeans playing in NA but I think we actually need to be proud of that. It’s not a problem because we’re building more talents here.

“It’s normal – we know it doesn’t just exist in League of Legends. We can’t ignore the economic powers of NA and places like China, maybe there’s a language barrier for the latter but if that didn’t exist we can probably expect that some Europeans would go there.

“It’s actually a good sign that our players are being recognised in other regions. Also, we are developing more and more talent here – we can fill the empty spots when players do leave so this is no concern for us at all.”

Indeed, there are ten new rookies in the LEC this year, seven of which participated in the 2019 EU Masters – an infrastructure set up by Riot in order to give new talents more opportunities.

Guerrero also cites the lack of relegation in the LEC as to why more teams are investing in rookies.

He says: “When you are playing in a league without relegation, you are more keen to take risks. It’s good for the teams to think of their long term futures, I can imagine some of these teams bringing rookies know that the rookies might not be 100% prepared right now but they want to invest in them.

“In the past, if you have the risk of being relegated, you cannot play these kinds of games. Instead, you need to be sure you always have the best of the best and your investment of players will have a real impact if it’s not a good one.”

The 2019 League of Legends World Championship saw all three EU teams make it out of their groups with full European rosters. Can Europe replicate their success and take it even further this year? Only time will tell. But one thing is for certain – they’ve become a breeding ground for fresh talent and for every player who chooses to relocate, there are plenty who are just as hungry and capable waiting in the wings for their chance to shine.