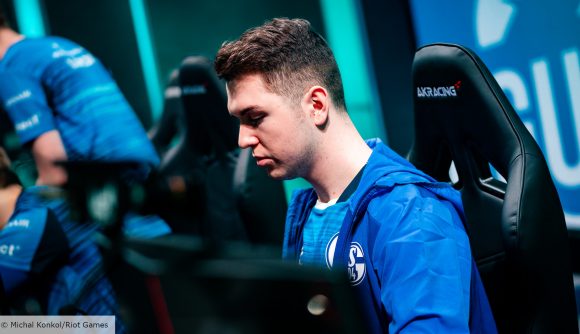 The return of Konstantinos-Napoleon ‘FORG1VEN’ Tzortziou was one of the most anticipated roster moves in League of Legends esports history, but the Greek ADC stepped down from Schalke’s roster after just three weeks into the new LEC Spring Split. Now the pressure on turning Schalke’s poor performances around falls upon academy ADC Nihat ‘Innaxe’ Aliev’s shoulders, and the 20-year-old is aiming to do just that.

Innaxe’s debut in the LEC wasn’t anything spectacular, but he pulled off an extraordinary performance against G2 Esports and managed to, alongside his teammates, take down one of the best teams in the world and come away with a KD of 8/2 on Ezreal.

Having to replace a player of FORG1VEN’s stature is no easy feat for anyone, and Innaxe, who admitted to receiving some hate from fans, seems to be handling the drama in a mature manner.

“There’s some hate towards me but it’s kind of normal,” he tells The Loadout. “When people with big brands have die-hard fans, anything that happens to their idol in a sense, even though I wasn’t anything to do with it, I kind of take the blame. I don’t care at all – I just laugh when I see it. I don’t mind it, overall, people generally have been kind of supportive.”

The former Excel player also gave some insight on what his relationship is like with FORG1VEN and what it’s like to be around him behind the scenes.

He says: “We didn’t really talk at all even when he was on the team. I don’t think he’s the kind of person to be involved with the academy team. There was just a hi, or hello, a bit of small talk. I don’t really know him and he doesn’t really know me. We just know each other but we don’t really speak to each other – it’s kind of a workplace thing.

“I don’t think we ever talked about the game that much. Maybe when we’re eating on the table with everyone and I just ask him about a champion and stuff like this. I don’t think he’s the type of person to go in depth, he’s very self-sufficient in that sense, he doesn’t really talk to other people about stuff – especially an academy ADC. Maybe he’d be open to but we just never talked about it – and I felt like that it was hard to talk about stuff, and I didn’t really feel the need to either.”

Schalke managed to pick up another victory in week five after defeating Team Vitality but Innaxe doesn’t think he’s had enough time in the competition to be judged on his performances just yet.

“I don’t think anyone can rate me yet, I’ve only played a few games,” he adds. “I had one good game against G2 and even that game I didn’t play that well. I’m just trying to get to play the game at my normal level and my peak.”