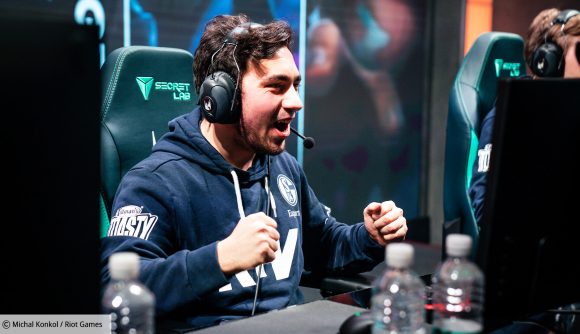 Schalke 04’s penchant for making last minute LEC playoff sprints has made for some of the spiciest timelines over the last couple of splits. Central to the team’s efforts is veteran jungler Erberk ‘Gilius’ Demir – known otherwise as ‘God Gilius’ – who has been a staple presence since returning to the main roster last summer.

However, despite Schalke achieving its best LEC finish since Summer 2019 last split, the team has decided it’s time for change. Managing director Tim Reichert has today released a statement announcing that Gilius will be benched next split, with Thomas ‘Kirei’ Yuen being brought in after a stint with French ERL side GamersOrigin.

“We looked into options for the jungle position this offseason, and very early on realised that Kirei could be a great fit for us,” he says. Kirei will now join fellow new recruit Ilias ‘Nuclearint’ Bizriken, who officially got the call up from Schalke’s academy team following Felix ‘Abbedagge’ Braun’s switch to LCS side 100 Thieves last month.

According to Reichert’s statement, the midlaner, alongside the rest of the team and coaching staff, all felt that Kirei would make for a solid fit.

Here's what @TimReichert14 had to say on the transfer and @GiliusLoL' future with the Royal Blues: pic.twitter.com/YwpupqSnon

“He’s (Kirei’s) an outstanding SoloQ player,” Reichert continues, “but not just that. He also performed very very well during his time in Turkey, and did well with teams in the ERLs.” The decision to bench Gilius was not an easy one for Reichert, though he maintains that it was made to try and inject some extra consistency into the team’s at times “shaky” performances.

Gilius remains under contract with Schalke, though has been given the opportunity to look for another team. If things don’t quite work out with Kirei, however, then a Summer 2021 miracle run could yet be on the cards.