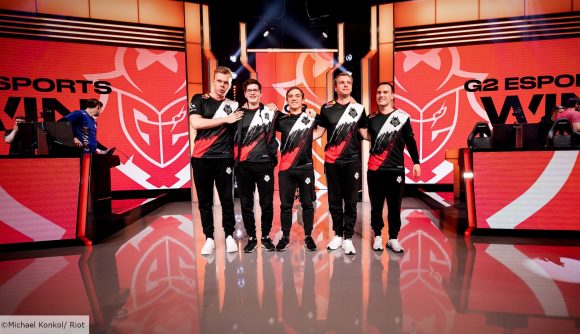 Defending LEC champion G2 was stunned in the opening week of the 2020 Summer Split after suffering two defeats.

It all appeared to be business as usual for G2 – which has now reverted back to having captain Luka ‘Perkz’ Perkovic as the team’s ADC and Rasmus ‘Caps’ Winther in mid lane – after defeating MAD Lions in the opening fixture in comfortable fashion. However, the following day saw G2 fall at the hands of last split’s fourth placed team Origen, and then a shock defeat at the hands of Team Vitality, who finished dead last during the Spring Split.

The surprisingly poor start to the Summer Split means that G2 is now already just one loss away from equalling the amount of defeats they suffered during the entirety of the last split. While performances like this are uncharacteristic for the 2019 Worlds finalist, support Mihael ‘Mikyx’ Mehle revealed to Dot Esports that a lack of scrims in the last week or so were likely the main factor to the team’s off week, claiming that G2 “didn’t know how to draft” as a result.

oh no we suck again

The less than ideal weekend comes after an optimistic Carlos ‘Ocelote’ Rodriguez said his League of Legends team was feeling “fresh” and that the goal was to not lose a single tower all split.

The first week of Summer Split threw up a number of surprise results across the board, with Vitality beating not only G2 but also Schalke to equal its total number of wins from the entirety of Spring Split.

At the top of the standings, Rogue also impressed, joining Fnatic as the only LEC teams to walk away from Week 1 without a loss.

While it is likely that G2 will bounce back and rise to the top of the standings by the end of the split, it appears that the race for playoff spots could be pretty wide open, with the likes of Vitality and Rogue looking to have improved massively from the spring.

The full Week 1 LEC standings can be found here.