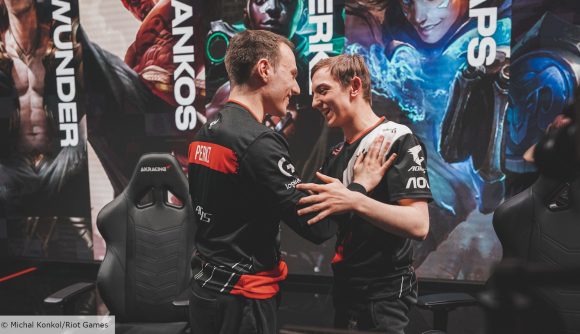 G2 Esports was the talk of the League of Legends offseason last year, when Rasmus ‘Caps’ Winther and Luka ‘Perkz’ Perkovic swapped roles post-Worlds. Now, after a dominating Spring Split, the pair are going to make the switch again, creating yet more headaches for their European counterparts.

Caps received some fairly harsh criticism in his first split as ADC, but despite turning things around and impressing in the Spring Split finals against Fnatic, it appears he is going to be returning to the botlane where he’s most comfortable ahead of the Summer Split and Worlds.

“We were very close to sending Wunder to botlane but we decided to run it back with our 2019 roster for summer/worlds,” G2’s coach Fabian ‘GrabbZ’ Lohmann says on Twitter. “Having the two best western mids and ads in the same team, sure gives some headaches.”

Of course, having experience in both roles is a great advantage for G2, especially if the pair want to mix things up on a game by game basis to keep their opponents guessing.

However, G2 can’t escape that the team had some shaky performances on the whole during the last Split. Despite going on to win the season in a dominant fashion, G2 dropped a game to FC Schalke 04, MAD Lions, and Misfits during the regular season, and were pushed into the lower bracket for their playoff run by MAD Lions.

It’s these results, plus Caps’ experience this season, that might have inspired the move. Luckily for us, we won’t have long to wait to find out just how G2 will run this summer and if the return to their roles is for the best.