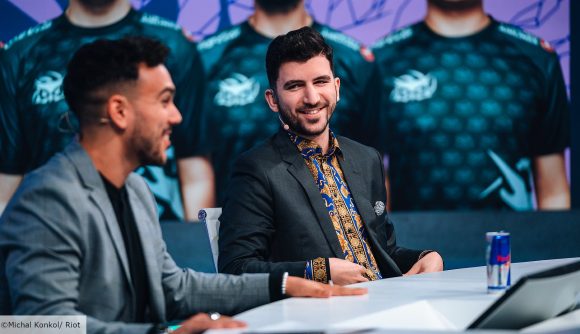 Jakub ‘YamatoCannon’ Mebdi is back in the League of Legends coaching game after joining Fnatic as head coach for the 2021 season. YamatoCannon, who spent the end of last season on the LEC and Worlds broadcast teams after leaving his coaching role at LCK team SANDBOX Gaming, is now joining the seventh LoL team of his coaching career.

The Swede has previous LEC coaching experience, having been at the helm of Splyce and Team Vitality, among others. Fnatic has also brought in a new assistant coach to join YamatoCannon: former head of strategy and analytics at T1, Gary ‘Tolki’ Mialaret.

YamatoCannon comes in at a time of substantial change at Fnatic. The team has already seen long-serving star player Martin ‘Rekkles’ Larsson depart for LEC rivals G2, and is yet to find a replacement AD carry. Just yesterday, it also announced the signing of midlaner Yasin ‘Nisqy’ Dinçer from Cloud9, which has seen 2020’s starting midlaner Tim ‘Nemesis’ Lipovsek confirm he will not be playing in the LEC for the Spring Split.

Despite admitting that working with Rekkles was a big reason for him wanting to join Fnatic, YamatoCannon says that the prospect of trying to beat him is now just as appealing.

“When I started to talk to Fnatic about motivations as to why I wanted to join, one of them was Rekkles,” he says. “To this day, Rekkles is still one of those motivations, because I want to beat him more than anything now.”

🗣️ @YamatoMebdi: “To the Fnatic fans… I swear I will put my blood, sweat and tears into this project.”https://t.co/QMmv7oWKmi pic.twitter.com/dNA9bnHR2X

Speaking to The Loadout during Worlds 2020, YamatoCannon expressed his desire to return to coaching for the 2021 season and claimed what he can accomplish is “far from completely explored.” Let’s see if he can push the boundaries with what is arguably his biggest appointment yet.