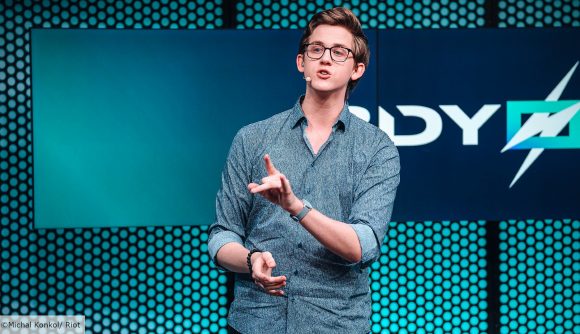 League of Legends caster and analyst Christy ‘Ender’ Frierson reportedly turned down offers from pro teams in the LEC and LCS during the last offseason, according to fellow LoL talent Nick ‘LS’ De Cesare.

In his August 3 Twitch stream, LS reveals to his viewers that Ender is Challenger in ranked League of Legends and that he had turned down teams in both the league he casts and across the pond in North America who wanted to sign him for the 2020 season. In the clip of the stream (in which Ender is lurking in chat), LS says: “Ender had LCS and LEC offers in the offseason, but chose to keep casting.” It isn’t clear whether this is in reference to an actual spot as a player on a main roster or as a coach/ analyst.

Ender himself later posted this clip to Twitter with the caption: “Fact,” which prompted a response from G2’s CEO Carlos ‘Ocelote’ Rodriguez who jokes that Ender should check his emails.

While Ender has stuck with casting on this occasion and chosen not to take up a role as a coach or player, others have gone the opposite way in 2020.

Popular LCS analyst and colour caster Joshua ‘Jatt’ Leesman ditched the desk to become Team Liquid’s head coach earlier this year and since coming on board has guided the team to the top of the Summer Split standings.

While Challenger-ranked Ender likely has the ability to make an impact on a team in the LEC or LCS, it looks like it isn’t enough to tempt him out from behind the casting desk.