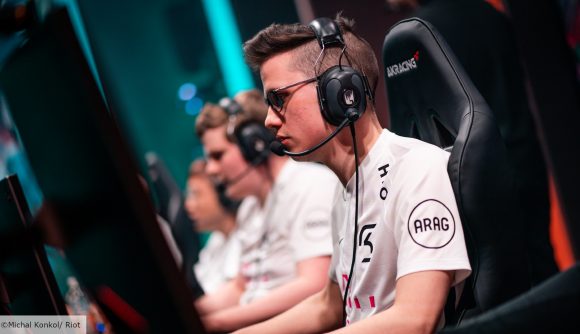 While a lot has changed in the LEC between the 2020 Summer Split and the 2021 Spring Split, one thing hasn’t – the teams that are missing out on Playoffs.

The same four teams – Excel, Misfits, Astralis (previously Origen), and Team Vitality – once again finished the regular season in the bottom four, despite roster changes throughout the offseason and even mid-split. In the case of Vitality, the organisation pinned its hopes on botlaner Juš ‘Crownshot’ Marušič, who was without a spot in the LEC after departing from SK Gaming at the end of 2020.

Vitality hoped the 22-year-old would motivate and inspire its young roster, and following the team’s victory over Misfits in the final week of Spring Split action (which put an end to Misfit’s Playoffs chances), Crownshot tells The Loadout how he’s planning to turn the team’s fortunes around in the summer.

“[When I joined the team] I just saw people losing confidence in themselves, I guess,” the botlaner says. “I tried to work on that and tell people not to be scared to take fights. That’s not what happened in [the Misfits game] – we could just take every fight. We could’ve played slower, but you don’t need to because you can just win the fights – I think that helped [my teammates] have confidence.”

As well as replicating that confidence in the Summer Split, Crownshot also reveals what else needs to change in the Vitality camp.

“We just need to get wins earlier,” he says, following a split where Vitality won just one of its first nine games. “[Being more] confident from the start can help with that. Besides that, just don’t be scared. It might be a bit different [in Summer Split] because it might be offline at some point – like on stage in the studio, I mean, but I’m not sure yet. That might affect people so we have to make sure it doesn’t knock their confidence.”

Crownshot also says that it’s important not to let opportunities slip, citing a few instances this split where he felt the team should have secured a win.

“I’m sure we should have won against Astralis and then we could have won six games at least,” he says of last weekend’s fixtures, “but I think [in the Schalke game] they just had a better draft and they played better. Some games throughout this split were for sure winnable if we [were better in] team fights. There was one game against Rogue that we could have won had we just played better.”

While Vitality has shown what it’s capable of when there’s nothing to lose, it appears that Crownshot’s role in the team is to instil that mindset when the Summer Split returns.

With a long break in play for Vitality now until the Summer Split rolls around, the Slovenian and the team’s backroom staff should have plenty of time to regroup and break its now three-split streak of failing to reach Playoffs.