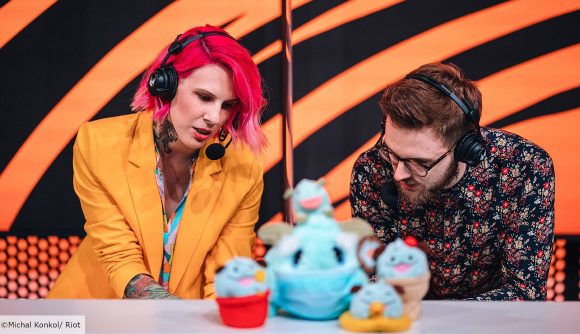 Following immediate backlash from casters, Riot employees, and fans, the League of Legends European Championship’s decision to partner with Saudi Arabian venture NEOM was quickly reversed in less than 24 hours. It now looks as if a big reason for that rapid turnaround was that the LEC’s on-screen talent put their careers on the line by threatening to boycott future broadcasts.

At pretty much the same time, the majority of the LEC talent team posted tweets explaining that they had informed Riot that they were refusing to appear on LEC broadcasts until the partnership with NEOM was scrapped.

“The LEC on-air talent team did not simply share messages on social media and walk away,” says caster Trevor ‘Quickshot’ Henry. “We raised our concerns internally, met with LEC leaders, and leaders across Riot Games to outline our collective position against the partnership and the request to terminate the contract. We were prepared to refuse to work the show this weekend to demonstrate how strongly we felt on the topic.”

Fellow caster Christy ‘Ender’ Frierson went elaborated further, saying that it wouldn’t just be this weekend’s broadcast that would be boycotted but all future productions “until the deal was revoked.”

We were prepared to refuse to work the show this weekend to demonstrate how strongly we felt on the topic.

I couldn’t be more proud of my fellow casters, but also my fellow rioters who all raised their voices to challenge something we did not believe in.

I have never been a part of a group of people that are so quickly able to come together and stand for what is right. The talent team said we would not appear on the LEC broadcast until the deal was revoked.

I am honored to call the casters I work with my friends.

This collective of tweets from LEC talent comes as a result of comments made by Duncan ‘Thorin’ Shields on streamer Christian ‘IWillDominate’ Rivera’s CrackDown podcast.

Thorin speculates that initial tweets about the NEOM partnership from the likes of Indiana ‘Froskurinn’ Black were only posted to appease fans who might pressure the casters to speak out about it and that they would never take real action, such as refusing to work for the LEC.

Froskurinn says Thorin’s comments “deeply saddened” her and makes it clear that she “did put her fucking job on the line.”

While it appears that most of the talent team will feature in Week 8’s coverage, Aaron ‘Medic’ Chamberlain has confirmed he will be missing this weekend’s broadcast due to the events of the past few days leaving him “emotionally and physically drained.” He says this decision is being supported by Riot and the LEC.