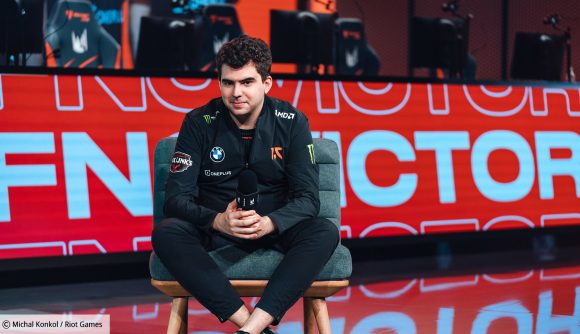 Although Fnatic failed to make it through the lower bracket to secure its place in the 2021 LEC Spring Split Playoffs semifinals, the team will at least be represented as toplaner Gabriël ‘Bwipo’ Rau makes his way onto the analyst desk for this week’s match.

“I’m grateful to announce I’ll be joining the analyst desk over at LEC this weekend,” Bwipo’s tweet reads. “Hoping that I’ll be able to bring a positive contribution to the LEC despite a poor split from me.”

The fan-favourite toplaner is known for his spicy picks – locking in Riven against SK Gaming in Week 4 of this year’s Spring Split, for example – and even spicier reaction gifs. He will be offering his insights when G2 Esports take on Rogue for a finals rematch spot against MAD Lions. G2 fell into the lower bracket semifinal spot following its round one defeat to MAD, while Rogue had to navigate its way past a strong Schalke 04 side to book its place in the semis.

Bwipo’s Fnatic meanwhile slumped to a 3-0 defeat at the hands of Schalke earlier in the bracket. The team has struggled to develop a consistent run of form this season, while question marks from some continue to hang over its in-game decision making. Bwipo has seldom been one to shy away from responsibility, tweeting out his disappointment in his own performance this split after the series.

While Bwipo won’t be a part of the on-Rift proceedings this week, we’re looking forward to learning plenty from his wealth of game knowledge.