The League of Legends World Championship is the arena for the world’s best teams and biggest names to do battle. But with gruelling qualifying processes in each regional league, the opportunity to compete at Worlds is far from a handout.

While there’s always some surprise qualifiers who defy the odds to reach Worlds, there are usually just as many shock omissions from the tournament’s lineup. 2020 will be no different, with former world champions, tournament regulars, and teams dominant in the regular season all somehow missing out on a trip to Shanghai for the chance to lift the Summoner’s Cup. But of those teams who will be watching from the sofa, which are the most surprising?

We’ve picked out five teams that we can’t believe won’t be at LoL Worlds 2020, due to either the quality of the roster, past record at the competition, or catastrophic dips in form that scuppered the chance to be on the world stage once again.

Well, this one is a bit of a given. 2019 world champions FunPlus Phoenix will not be defending its title after failing to bag one of the four spots reserved for LPL teams.

Despite keeping the roster that won in Paris last year largely intact, FPX has struggled in 2020. Performances, particularly in the Summer Split where it mattered most, have not been to the high standards of 2019. While this meant that Worlds qualification was in doubt for some time, a tournament without its current champion is always a bit of a surprise.

FPX 2-3 iG. We fought hard, but the result didn’t favor us this time. It’s sad to say, our 2020 journey ends here. But this too shall pass. See you again on the rift. #FPXLOL https://t.co/xquCECpJil

2018 Worlds winners Invictus Gaming are one of those teams that just always seems to be at Worlds. Like, always. As well as its 2018 victory, IG continued to impress on the global stage and reached the semifinals last year where it was defeated by eventual winners FunPlus Phoenix.

However, IG has had a virtually identical season to FPX, with an underwhelming Spring Split followed by disaster at the Summer Playoffs and Regional Qualifiers. For there to be four LPL spots and the two most recent world champions to fill neither is pretty extraordinary. 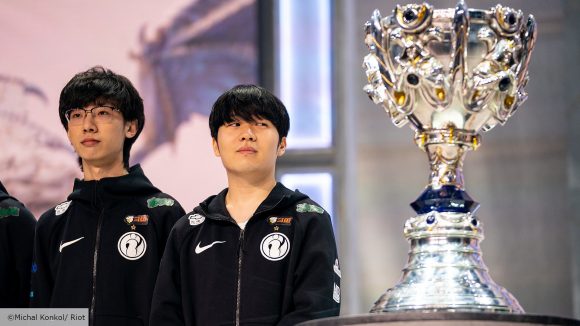 Boy, oh boy, where did it go wrong for Cloud9? If you said to anyone a few months ago that Cloud9 would not be representing the LCS at Worlds, they’d have laughed at you. Now though, it will be watching FlyQuest, TSM, and Team Liquid fly the flag for NA instead.

Why is this such a shocking omission from the competition? Off the back of winning the Spring Split in impressive fashion, Cloud9 continued to dominate NA with a 9-0 start to the Summer Split. Following its first defeat of the split to 100 Thieves, however, it all began to unravel.

Cloud9 finished the regular season 13-5 and the downward spiral capitulated in the Playoffs. Knocked into the losers bracket by FlyQuest and then finished off by TSM, Cloud9 somehow went from destroying the LCS for 80% of the year to failing to qualify for Worlds. Yikes.

With the most Worlds titles and arguably the best LoL player to have ever lived on your side, getting to Shanghai should’ve been simple for T1, right? Wrong.

Winning the LCK Spring Split made it seem like regular service would continue for T1 after a top four finish at 2019 Worlds. However, the Summer Split has been a rocky one. With the team making the controversial decision to bench Lee ‘Faker’ Sang-hyeok and then being eliminated from the Playoffs, even some of T1’s fans were turning against them.

We’ve tried hard, but our Summer ends here. Thank you fans for supporting us this journey.#T1WIN #T1Fighting pic.twitter.com/P7jP6oO2cJ

The Regional Qualifiers were now T1’s last hope to reach Worlds, but a 3-0 sweep at the hands of Gen.G saw that ticket to Shanghai blow away in the breeze.

While Taiwanese team ahq eSports Club has never really made much of a run at Worlds, it’s one of those teams that always just seems to be there. Five of the last six iterations of the World Championship have seen ahq representing the PCS league (previously the LMS), with 2015 even seeing them get out the group stage and reach the quarters.

However, this Worlds stalwart failed to book its spot in Shanghai after being knocked out of the Summer Playoffs, despite placing second in the regular season.

While most LoL fans across the globe probably won’t notice ahq’s absence, it will certainly be a big surprise for the community in that region.

So that concludes our list of this year’s surprise Worlds omissions. Find out which teams actually qualified in our guide to LoL Worlds 2020.