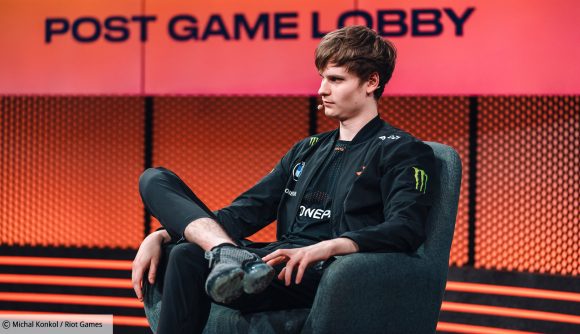 There has been a change in personnel in the Fnatic camp ahead of the start of its League of Legends Worlds 2021 campaign. The team has announced that Elias ‘Upset’ Lipp has been “forced to return home”, less than 24 hours before Fnatic’s first game of the Group Stage against Hanwha Life Esports, due to “an urgent family matter”. The German will be replaced by Fnatic Rising botlaner Louis ‘Bean’ Schmitz.

Upset had finally reached the Worlds stage for the first time after four years in the LEC, having entered the league with Schalke 04 in 2018, before spending the 2020 season playing for Origen ahead of his switch to Fnatic.

Fnatic Rising botlaner Bean will now make his Worlds debut in Upset’s absence. Fnatic says that Bean has “been preparing with our team the last few weeks in Reykjavik”, though it is uncertain if this means he has been involved in organised scrims.

Bean has played a major role in Fnatic Rising’s successes this season, achieving a second place finish with the team in the Summer 2021 edition of EU Masters after succumbing to the LFL’s Karmine Corp.

With no actual LEC experience, let alone experience on the World’s stage, Bean now finds himself in the unenviable position of starting his first top tier League of Legends game against Kim ‘Deft’ Hyuk-kyu, as Fnatic take on Hanwha Life Esports later today.